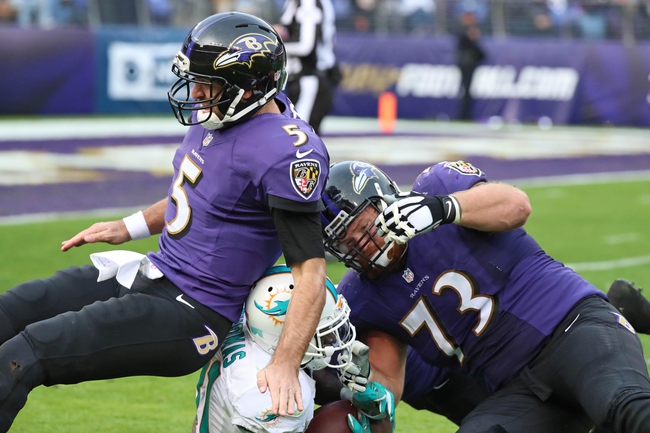 Down at Hard Rock Stadium on Thursday, August 17th, the Baltimore Ravens and the Miami Dolphins will meet up in Week 2 NFL preseason action.

Baltimore’s Week 1 preseason opener against the Redskins was something of a sloppy affair, as starting QB Ryan Mallett (playing for the injured Joe Flacco) threw for only 58 yards during the entire first half. Kicker Justin Tucker was a busy guy, though, booting three field goals to help Baltimore to a 23-3 victory.

The Ravens are coming off a disappointing 8-8 season in 2016 and missed the playoff for the second year in a row. This season, head coach John Harbaugh will preside over a few new faces including SS Tony Jefferson and CB Brandon Carr alongside QB Joe Flacco, RB Lorenzo Taliaferro and WRs Jeremy Maclin and Mike Wallace.

Over on the Dolphins’ side, they’re coming off a preseason Week 1 win over the Falcons 23-20, thanks to a 13-point fourth quarter. Dolphins QB David Fales had a solid game, going 8-of-17 for 184 yards, two touchdowns and a pick. The high man in receiving was Damore’ea Stringfellow, who finished with two catches for 116 yards (one was for a whopping 99 yards) and a TD.

Miami made the playoffs last season as a Wild Card after a 10-6 record, but lost in the opening round 30-12 to the Pittsburgh Steelers. Head coach Adam Gase will try to build off that success after retooling the lineup in the offseason. Notable arrivals include LB Lawrence Timmons and G Ted Larsen, while names like TJ Yates and Jordan Cameron have departed. Miami will look to the newly-signed Jay Cutler to replace QB Ryan Tannehill this year, as Tannehill will have season-ending ACL surgery.

Elsewhere on the injury front, Miami’s notable questionable designations include Kenny Stills, Jay Ajayi, Kiko Alonso and Mike Pouncey. As for the Ravens, they’ve got some names to watch as well. QB Joe Flacco (back) will not play in the preseason, and Baltimore has a host of players who will miss the season including Dennis Pitta and Crockett Gillmore. Other questionable names to watch this week include Larry Donnell, Sheldon Price and Maurice Canady.

The season hasn’t even started yet, and already both the Dolphins and the Ravens are reeling due to injuries. This will throw the remainder of the preseason games (not to mention the regular season) into flux, and things will be tough to nail down. Expect a heavy dose of David Fales from the Dolphins this week opposite Ryan Mallett on the other side. Neither of those names inspires much confidence, but considering the scope of Baltimore’s injury situation right now I’d imagine their third- and fourth-string guys will be doing most of the work here. I’ll take the Dolphins for the victory in this one.