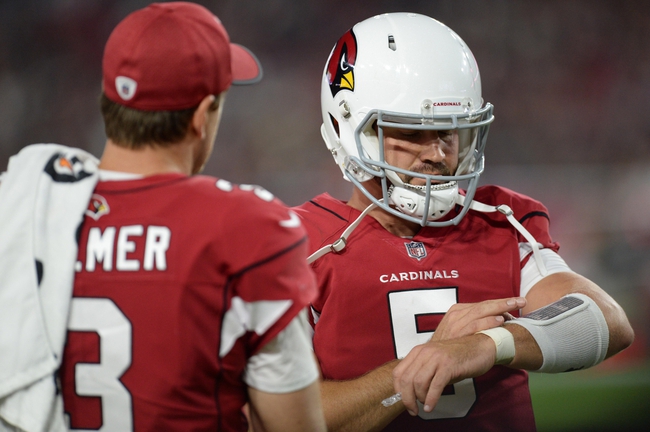 The Chicago Bears and Arizona Cardinals meet Saturday in NFL preseason action at U of Phoenix Stadium.

The Chicago Bears are coming off a 17-24 loss to the Denver Broncos, but they may have found their starting quarterback in rookie Mitchell Trubisky. Despite the losing effort, Trubisky completed 18 of 25 passes for 166 yards and one touchdown and ran for 38 yards. Mike Glennon and Mark Sanchez weren’t nearly as impressive as the kid despite getting far fewer reps. Benny Cunningham led Chicago with 41 rushing yards on seven carries and one touchdown while Victor Cruz showed there’s something left in the tank with three catches and a score. Defensively, Nick Kwiatkoski led the Bears with six tackles, John Timu had one sack and Jonathan Bullard had one tackle for loss. The Chicago Bears would love to find another positive in this preseason game regardless of the result.

The Arizona Cardinals are now 1-1 in preseason play after beating the Oakland Raiders 20-10 on Saturday. Carson Palmer has thrown just eight passes during exhibition play, while backup Drew Stanton is coming off a game in which he completed 11 of 15 passes for 112 yards and a touchdown. David Johnson has carried the ball just three times for 16 yards and wide receiver Brittan Golden has made the most of his reps, as he’s combined for four receptions, 79 yards and one touchdown. Defensively in the win over the Raiders, Josh Bynes led the Cardinals with seven tackles, Kareem Martin had 0.5 sacks and Markus Golden had one tackle for loss. The Arizona Cardinals are likely going to give their starters more reps in this contest than previously with only two preseason games left before the backups take all the minutes.

Buzz is building in Chicago that Trubisky is going to be named the starting quarterback for the Bears. If that's the case, I'd expect Trubisky to continue getting the bulk of the reps. Stability is huge in a preseason game, as it's the constant shifting of players that make these games damn near impossible to predict. Add in the injuries to the Arizona Cardinals, and you have to like the point we're getting with the Chicago Bears, especially with the hook as well.