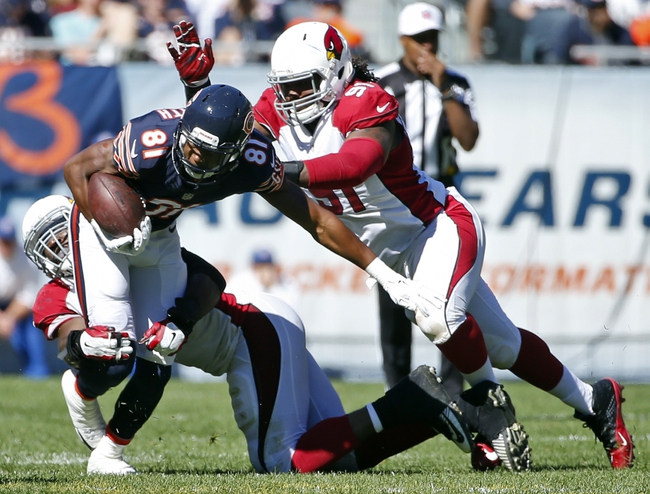 Down at University of Phoenix Stadium in Glendale on Saturday, the Chicago Bears and the Arizona Cardinals will be meeting up in NFL preseason Week 2 action.

Chicago is coming off a pretty dismal 2016 season, where they finished 3-13 and last place in the NFC North. The Bears didn’t get much help from injuries, as they had an NFL-high 19 players on IR by the end of the year.

The Bears head into 2017 as a new-look team for the third season under head coach John Fox. The big acquisition from the offseason for Chicago was QB Mitch Trubisky, whom the Bears traded up in the draft to get. QB Mike Glennon will fill the gap left by Jay Cutler’s departure for the time being, but he won’t have impact players like WR Alshon Jeffery, TE Logan Paulsen or WR Marquess Wilson to throw to. Chicago did bring in a few notable names during the offseason, including WR Deonte Thompson and TE Daniel Brown.

The Bears lost their Week 1 preseason game to the Broncos 24-17, but the good news is that the youngster Trubisky led the team on three scoring drives and finished 18-of-25 for 166 yards and a TD. Deonte Thompson led the team in receiving with five catches for 64 yards.

Over on the Cardinals’ side, they were early Super Bowl favorites, but quickly succumbed to injuries and sub-par play. Arizona would finish 7-8-1 and second in the NFC West following a 1-3 start and an injury to QB Carson Palmer.

In Arizona’s official preseason opener (minus a 20-18 loss to the Cowboys in the Hall of Fame Game), they secured a 20-10 win over the Raiders. Carson Palmer hooked up with Brittain Golden for a 12-yard score in the first quarter, while Drew Stanton led the way statistically on a 11-of-15 line for 112 yards and a second-quarter TD.

Both teams have some guys to keep an eye on injury-wise. Chicago’s CB Prince Amukamara is questionable here, as are WR Josh Bellamy, RB Jeremy Langford and T Mike Adams. As for Arizona, they’ve got some questionable guys in WR John Brown, WR Brittan Golden, LB Jarvis Jones and CB Mike Jenkins.

The Bears might get a bit of a jolt with Trubisky under center here, but I don’t expect him to have quite as dominant a game as he did in Week 1. I’d imagine Chicago comes back to earth a bit here, showing their true colors as a rebuilding team. I’ll take the Cardinals for a win and a cover in this one.