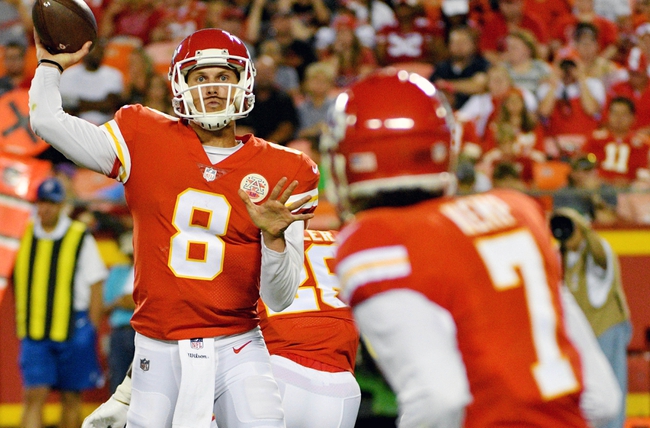 The Kansas City Chiefs will look to bounce back after falling in their preseason opener by a final score of 27-17 at the hands of the 49ers. Alex Smith was solid in his limited action, racking up 48 yards on 4 for 6 passing. KC’s first round pick, Patrick Mahomes II was impressive in his own right, going 7 for 9 for 49 yards and a touchdown, while Tyler Bray completed 5 of 8 passes for 63 yards with an interception. The problem for the Chiefs was that Smith led the team in rushing, with his one scamped going for 10 yards. C.J. Spiller put up 2 carries for 9 yards, while Charcandrick West carried the rock 5 times for 6 yards. Spencer Ware only put up 6 yards as well but at least found the end zone with a 2-yard score. Chris Conley led the team with 46 yards on a pair of catches, while Tyreek Hill caught one ball for 32 yards and Spencer Ware caught a team-high 3 passes out of the backfield for 20 yards. Marcus Kemp’s lone reception was a 1-yard TD grab in the 3rd quarter, before the Chiefs were outscored 17-0 in the final stanza. Earl Okine, David King and Marcus Rush each notched a sack, as the defense allowed a whopping 434 yards in the loss.

The Cincinnati Bengals came out on the right side of a 23-12 scoreline in their opener, defeating Tampa Bay. Andy Dalton went 4 for 5 with his lone blemish going the other way as a pick. Jeff Driskel led the team with 97 yards and a touchdown on 8 of 9 passing, while also leading the squad with 34 yards rushing on 5 carries with a touchdown on the ground as well. Jeremy Hill used his 7 carries to rack up 26 yards, while Tre Carson handled the rock 8 times for 32 yards. Alex Erickson led the Bengals receiving core with 50 yards and 3 catches, while A.J. Green hauled in a pair of balls for 21 yards. Josh Malone was on the receiving end of Driskel’s touchdown toss as 12 different Bengals caught a pass in the win. Jordan Willis logged Cincy’s lone sack while Demetrious Cox logged a pick in the win, despite the Buccaneers outperforming the Bengals offense, putting up 330 yards of total offense compared to Cincinnati’s 316.

Cincinnati had a strong showing in week one, but I can’t expect Kansas City to fall apart like they did in the last quarter of their opener. This Chiefs bunch is a deep squad that will have position battles going from top to bottom, even in a few starting positions as well. I like the Chiefs to bounce back and take this one given their solid form on the road.