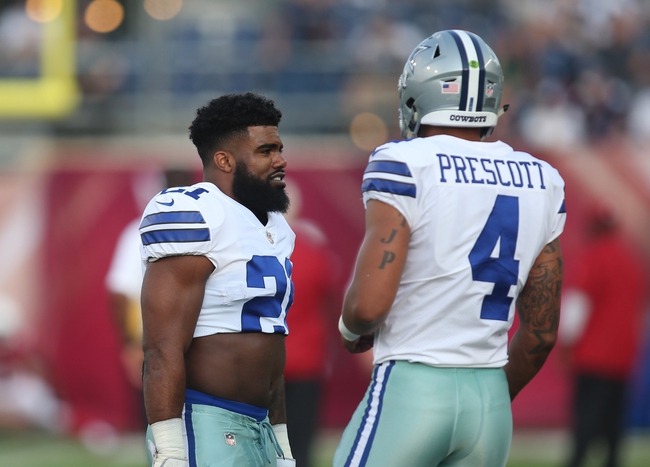 The Indianapolis Colts are coming off a 24-10 loss to the Detroit Lions in which the offense scored just three points in the first three quarters. Quarterbacks Stephen Morris and Phillip Walker were a combined 22 of 40 for 180 yards, and they’ll have to continue making strides with Andrew Luck still questionable to open the regular season. Troymaine Pope opened up the Lions ground game with 31 yards and a touchdown on seven carries while Freddie Brown and Bruce Natson combined for 104 receiving yards on nine receptions. Defensively, Edwin Jackson led the Colts with five tackles, T.Y. McGill had one sack and T.J. Green had one tackle for loss. The Indianapolis Colts showed little reason for optimism in their preseason debut, as this team lacks depth and not having Luck on the field is a giant concern with the regular season just weeks away.

The Dallas Cowboys won the Hall of Fame game over the Arizona Cardinals, 20-18, despite resting their starters and giving up 15 first quarter points. Kellen Moore and Cooper Rush each had a touchdown pass while running back Rod Smith led the way with 64 yards on 18 carries. Wide receiver Brice Butler also showed big play ability with just two receptions and could earn some serious playing time during the regular season as a third or fourth option. It’s going to be interesting to see how much the star duo of Dak Prescott and Ezekiel Elliott participate in this game, especially with Elliott facing a six-game suspension for his off-the-field issues. Defensively, Joseph Jones led the Cowboys with nine tackles, Anthony Brown had one sack and Kavon Frazier had a tackle for loss. The Dallas Cowboys also have a ton of injuries, so managing the roster during these exhibitions is key for a team with Super Bowl goals.

Usually you don't see lines this large in preseason games, so the Colts are worth a look with the points just off value alone. However, the Indianapolis Colts simply aren't a good football team with zero depth, which is why they were waxed in their preseason opener and is why this line is so massive for a preseason game. The Dallas Cowboys will perform better at home and have had a ton of time to practice and get ready. Don't love laying this many points in a meaningless game, but the Colts are awful. I'll take Dallas by a touchdown.