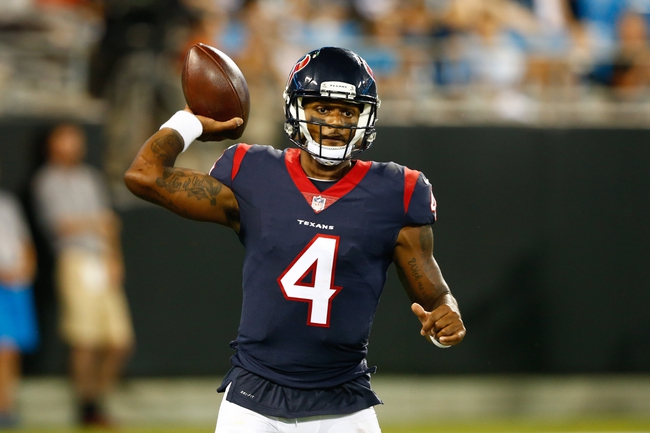 The New England Patriots lost their first preseason game to the Jacksonville Jaguars, 31-24, and didn’t give their key starters any reps. It’s no secret that Bill Belichick and his staff limit his starters in the preseason and gives them extremely little reps to make sure everybody is 100 percent come the regular season. There’s a decent chance you won’t see Tom Brady, Julian Edelman or Rob Gronkowski in this game either based on how the Pats have managed things in the past. But in the loss, Jimmy Garoppolo torched the Jags by completing 22 of 28 passes for two touchdowns while Jacob Hollister had over 100 receiving yards on seven catches. Defensively, Jordan Richards led New England with seven tackles, Damarius Travis had a tackle for loss and Elandon Roberts had three solo tackles. The New England Patriots keep proving they’re the most well prepared team in the league.

The Houston Texans are coming off a 27-17 loss to the Carolina Panthers, a game that proved there’s a real quarterback battle going on. Tom Savage completed nine of 11 passes for 69 yards while Deshaun Watson completed 15 of 25 passes for 179 yards. Watson made the right plays with the football and had 24 rushing yards and a touchdown, and he could quickly win over the Houston fans if he continues to play this mature. The other standouts for Houston in the first exhibition was D'Onta Foreman, who had 76 rushing yards on nine carries and Dres Anderson’s 80 receiving yards on four receptions. Defensively, Zach Cunningham led the Texans with seven tackles, Brandon Dunn had one sack and Gimel President had a tackle for loss. The Houston Texans main concern right now is finding out who is going to play quarterback this season.

This line opened up with the Pats as the favorites, so you are getting some value with New England. However, I'm with the public here. The Patriots don't value preseason the way other teams do, and they certainly don't give their starters much play at all. Not to mention the Texans still have a full quarterback battle going on, which is key for my handicapping these games. Guys fighting for a starting spot usually take their game to another level and that results in victories more times than not. I look for big games from Watson and Savage, giving the Houston Texans a victory.