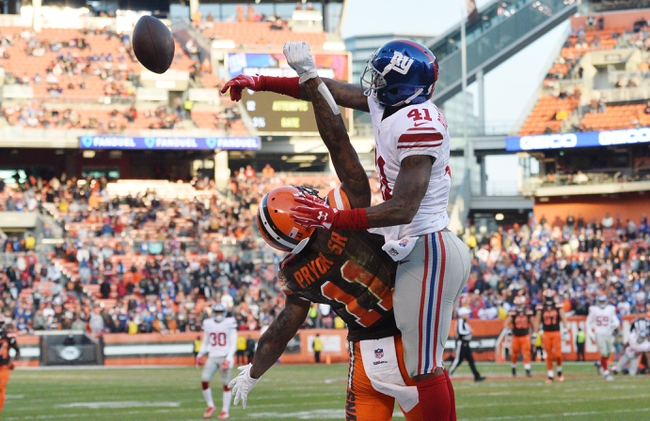 Out at FirstEnergy Stadium on Monday evening, the New York Giants and the Cleveland Browns will be wrapping up the NFL’s Week 2 preseason action.

The Giants are coming off a pretty solid 2016 season in which they finished 11-5 and second in the NFC East. New York’s playoff hopes were dashed in the Wild Card Round, however, as the Giants fell to the Packers 38-13 to end their campaign. Still, it was New York’s first postseason trip since their most recent Super Bowl championship in 2011.

In the Giants’ Week 1 preseason game, they fell 20-12 to the Steelers. Notable performers for New York in that one include Geno Smith (10-of-16; 114 yards; INT) and the combination of Aldrich Rosas and Mike Nugent (four field goals).

Over on the Browns’ side, they’re fresh off another disappointing season. Cleveland finished dead last in the AFC North with a dismal 1-15 record. The Browns started the year 0-14, their worst start in franchise history, and have now posted losing seasons for nine straight years.

The Browns and head coach Hue Jackson lost a few notable names in the offseason, including Terrell Pryor, Stephen Paea and Jordan Poyer, but also gained a few key guys like Kenny Britt, Marcus Martin and Matt McCants. Cleveland also picked up QB Brock Osweiler in a trade back in March.

In the Browns’ preseason opener against the Saints, Cleveland posted an unfamiliar win at 20-14. Positive signs were abundant for the Browns here, as 2017 number-one pick Myles Garrett had a solid game. Rookie QB DeShone Kizer also posted a late TD pass to put the Browns over the top.

We’ve got a few notable injuries on both sides. The Giants will be watching Jason Pierre-Paul, Dominique Rodgers-Cromartie and WR Dwayne Harris as notable questionables, while the Browns are dealing with issues to WR James Wright, QB Charlie Whitehurst and WR Marlon Moore (and Moore in all likelihood will be out Monday).

There’s finally a bit of a buzz in Cleveland right now, as the Browns may very well be able to flirt with a winning season in 2017. That said, Cleveland is also pretty young and inexperienced, especially further down the roster. All things considered, I’m going to go with the Giants to get it done here and post a cover/win with the spread so reasonable.