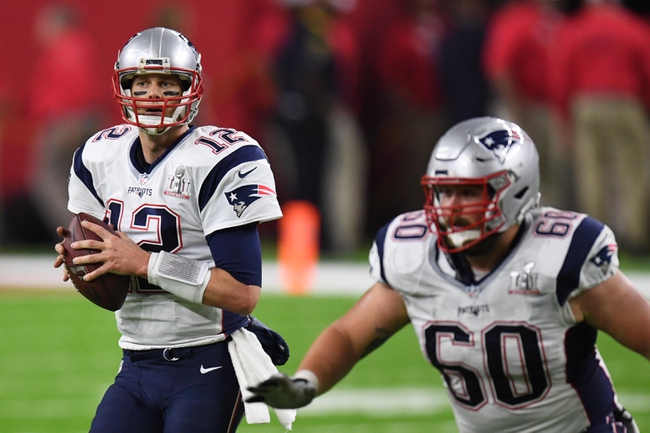 On Friday up at Ford Field, the New England Patriots and the Detroit Lions will be meeting up in Week 3 NFL preseason action.

New England is 0-2 in the preseason so far, falling 31-24 to the Jaguars and 27-23 to the Texans. In that most recent game, veteran QB Tom Brady made his preseason debut, tossing a TD and finishing 6-of-9 for 67 yards. DJ Foster (four receptions; 52 yards; TD) and Rex Burkhead (three receptions; 50 yards; TD) were the leading receivers for New England.

Just about everybody is familiar with the Pats’ 2016 run. New England cruised through the regular season at 14-2, then beat the Texans and Steelers handily on the way to a huge overtime Super Bowl comeback win over the Falcons.

Over on the Lions’ side, they are 2-0 in the preseason right now, following wins over the Colts 24-10 and Jets 16-6. QB Matthew Stafford had a solid game for the Lions in that one, going 8-of-10 for 84 yards and a TD to Marvin Jones in the second quarter. Kicker Matt Prater also showed his stuff with three field goals from 37, 25 and 50 yards.

Detroit bagged a playoff berth last season after finishing 9-7 and second in the NFC North, but lost the Wild Card Game against the Seahawks 26-6. Still, it was the Lions’ first postseason appearance since 2014.

Head coach Jim Caldwell will be back on the sideline for the Lions this season, and he’ll preside over a few new faces. Additions to Detroit’s roster this year include OT Rick Wagner, DT Akeem Spence, DE Cornelius Washington and TE Darren Fells.

The Pats are notoriously tight-lipped about injuries, but they’ll be keeping an eye on a few players, notably WR Malcolm Mitchell, TE Rob Housler and T Sebastian Vollmer. As for the Lions, they’ve got a few notable injury issues as well in TE Eric Ebron, WR Andre Caldwell, TE Brandon Pettigrew and RB Theo Riddick.

We’ll likely get a pretty heavy dose of starters on both sides of this one, but after halftime it’s anyone’s guess. The thing here is, the Patriots don’t seem to do very well during the preseason record-wise, using the time instead to check out younger guys and bubble players. I’d imagine New England keeps things vanilla here as well, which should give Detroit ample opportunity to cover. Give me the Lions.