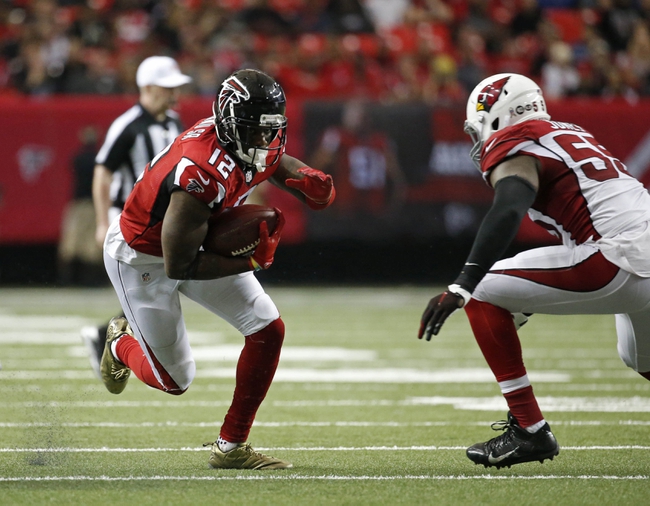 Out at Mercedes-Benz Stadium on Saturday, August 26, the Arizona Cardinals and the Atlanta Falcons will be meeting up in Week 3 NFL preseason action.

Atlanta is 0-2 thus far in the preseason, dropping their opener to the Dolphins 23-20 and their Week 2 game 17-13 to the Steelers. The key Falcons performer in that one was RB Terron Ward, who rattled off a 5-yard touchdown run in the first quarter as part of a nine-carry, 37-yard outing.

Everybody knows what happened to the Falcons in 2016. Atlanta is looking to resurrect themselves after a heartbreaking 34-28 overtime loss to the Patriots in the Super Bowl. Atlanta was up 28-3 in the third quarter during that defeat, making the pill even harder to swallow. Still, the Falcons look primed for another solid season and have added a few new faces including DE Jack Crawford, DT Dontari Poe and WR Andre Roberts.

Over on the Cardinals’ side, they’re sitting at 1-2 in the preseason so far, falling to the Cowboys in the Hall of Fame Game 20-18 and beating the Raiders the next week 20-10. Arizona’s last outing was a 24-23 loss to the Bears. QB Carson Palmer hooked up with Jermaine Gresham for a TD in the second quarter of that loss, while QB Blaine Gabbert ran in a TD and threw for another one.

Arizona is looking to improve after a disappointing 7-8-1 record in 2016 which saw them finish second in the NFC West and miss the playoffs. QB Carson Palmer is back and healthy once again after an injury sidelined him for most of last year, and the Cardinals added a few new players who should help out, including S Antoine Bethea, K Phil Dawson and LB Jarvis Jones.

This should be a pretty fun matchup to watch, as we’ll likely get to see quite a bit of the first-team offenses. Ryan and Palmer are both capable QBs, and we should see a decent-scoring game. I like the over in this one, and I’ll also take the Falcons to bang out a cover in an entertaining game.