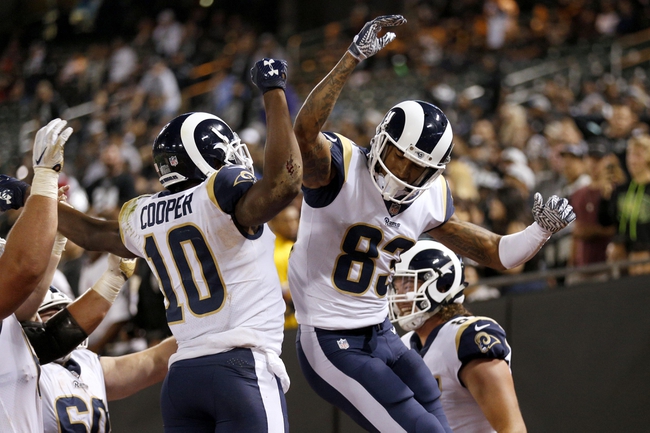 We have a battle of L.A. brewing in week 3 NFL Preseason action as the Chargers visit the Rams.

The Los Angeles Chargers will look for their first win of the preseason after falling to 0-2 following their 13-7 loss to the Saints in week 2. Kellen Clemens saw the bulk of the workload under center, going 10 for 17 for 99 yards while also leading the team with 26 rushing yards with his 3 carries. Cardale Jones went 7 for 15 with 61 yards and an interception in the loss while Andre Williams used his team-leading 11 carries to rack up 23 yards. Jamaal Jones led the Chargers with 5 catches for 47 yards, while Geremy Davis came 2nd with 3 catches for 35 yards. Defensively, Chris McCain, Desmond King, Tre Boston and Melvin Ingram combined for 3 sacks while Dexter McCoil recorded a 99-yard pick six.

The Los Angeles Rams will look to stay perfect after winning their first two games of the preseason, including a 24-21 win over Oakland in week 2. Jared Goff was outstanding, racking up 160 yards and a touchdown on 16 of 20 passing, while Sean Mannion was also very good, throwing for 132 yards and a touchdown on 15 of 22 passing. Todd Gurley put up a team-high 38 yards and a touchdown with his 8 carries, while Malcolm Brown used his team-high 9 attempts to put up just 13 yards. Cooper Kupp hauled in a team-high 6 passes for 70 yards and a touchdown, while Mike Thomas and Gerald Everett each caught 4 passes. Josh Reynolds caught the other touchdown pass for the Rams in the win. Defensively, a Casey Sayles sack and a Trumaine Johnson interception highlighted a sold outing from the Rams, giving up just 261 yards of total offense in the win despite giving up 21 points.

Even though it’s preseason, I think the Rams are showing signs of being the young, run and gun team we expected from last season that just never showed up. Goff is starting to look like a true #1 pick, while the Chargers look like they may be a tad uncomfortable in their new digs. I’ll lay the low line with the Rams to stay perfect here.