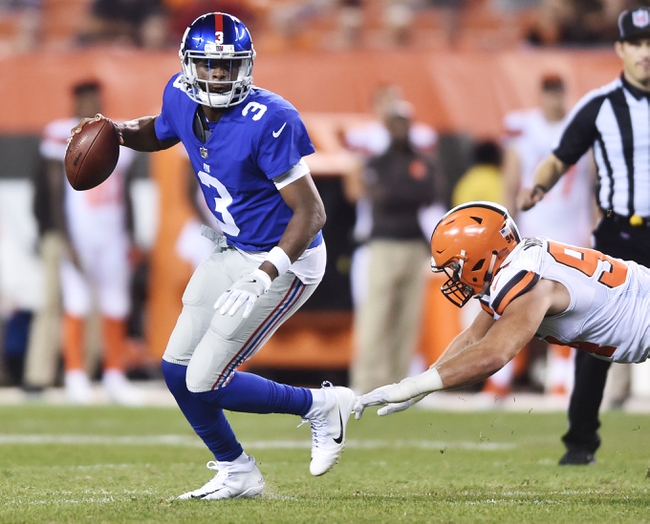 We have a battle of the Big Apple in week three NFL preseason action, as the Jets take on the Giants from MetLife Stadium.

The New York Jets will look to bounce back after suffering their first loss of the preseason, falling to 1-1 after a 16-6 loss at the hands of the Detroit Lions in week two. Bryce Petty saw the bulk of the workload, going 15 of 24 for 160 yards and an interception. Bilal Powell recorded team-highs of 9 carries for 32 yards while Myles White led the team with 3 receptions for 43 yards. No Jets player caught more than 2 passes after that, led by Jordan Leggett who hauled in a pair of balls for 40 yards. Defensively, Demario Davis, Josh Martin and Corey Lemonier combined for the Jets’ 3 sacks as a team, with Lemonier recording an interception while Martin forced a fumble in the loss.

The New York Giants will look for their first win of the preseason after falling to 0-2 after their 10-6 loss to the Browns in week two. Eli Manning led the team by going 10 for 14 for 80 yards, while Geno Smith completed 11 of his 17 pass attempts for 79 yards and a pick. Wayne Gallman led the team with 22 yards on 5 carries, while Paul Perkins took his team-leading 6 carries and put up just 10 yards. Odell Beckham Jr. led the team with 3 catches for 37 yards before leaving the game with a sprained ankle. Evan Engram, Will Tye and Sterling Shepard also pulled in 3 receptions apiece. B.J. Goodson and Jason Pierre-Paul each recorded a sack, while JPP also added an interception in the losing effort for the G-Men.

The Jets will be one of the worst teams in the league in the regular season, and I think their performance in week 2 was a sign of things to come. On the other hand, I’m not sure how well the Giants’ offense will perform if Beckham can’t go, so rather than pick a side, I’ll take the under as I see this one being a low scoring game.