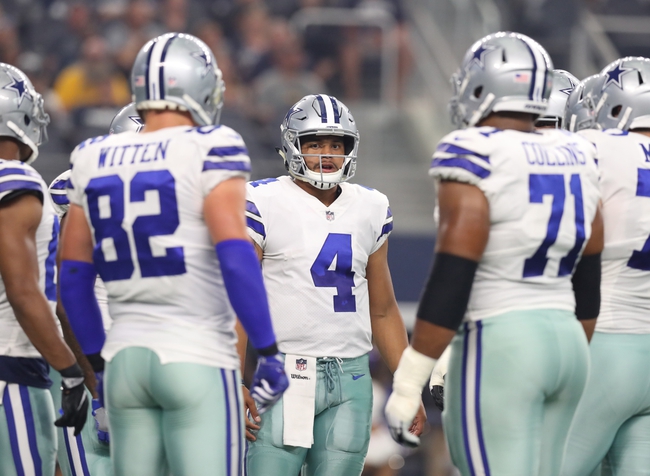 Down in Arlington at AT&T Stadium on Saturday, the Oakland Raiders and the Dallas Cowboys will be meeting up in Week 3 NFL preseason action.

The Cowboys are coming off a dominant regular season in 2016, finishing 13-3 on the year and first place in a competitive NFC East. Dallas’ postseason hopes were dashed early, however, following a Divisional Playoff loss to the Packers 34-31. Still, the Cowboys look good for this year following notable offseason additions like Nolan Carroll, Darren McFadden and Kellen Moore.

The Cowboys took a 20-18 win over the Cardinals in the Hall of Fame Game, then fell to the Rams 13-10. Last week, Dallas bagged a 24-19 win over the Colts. In that one, Dak Prescott and Dez Bryant hooked up early on in the first quarter for a 32-yard TD pass. Bryant would finish with two grabs for 55 yards and the score.

Over on the Raiders’ side, they had a nice 2016 as well, going 12-4 in the regular season. Like the Cowboys, Oakland was one-and-done in the playoffs, however, falling in the Wild Card game to the Texans 27-14. Oakland lost a few guys in the offseason (namely RB Latapius Murray) but recharged with additions such as Jared Cook, Cordarelle Patterson and EJ Manuel.

Oakland is 0-2 in the preseason so far, falling 20-10 to the Cardinals and 24-21 to the Rams in their last outing. In that game, Derek Carr was great on 7-of-9 passing for 100 yards, two TDs and a pick. Amari Cooper would finish as Oakland’s leading receiver with three catches for 46 yards.

The Cowboys are dealing with some notable injuries on D, namely Jourdan Lewis and Chide Awuzie. DBs Xavier Woods and Leion McFadden are also banged up. As for the Raiders, they’ve got a a questionable issue in Obi Melinfonwu (ankle), while Gareon Conley will be out of action.

Meanwhile, the Cowboys are 7-19-1 in their last 27 games on field turf and 1-6 ATS in the last seven games overall.

This should be a fun game to watch, and we’ll get a heavy dose of starters on both sides. Both the Raiders and the Cowboys should do well this season, though Oakland has yet to really show their stuff in the preseason. Dallas, meanwhile, seems to be humming on all cylinders among their starters, so I’ll take the Cowboys to cover in this one.