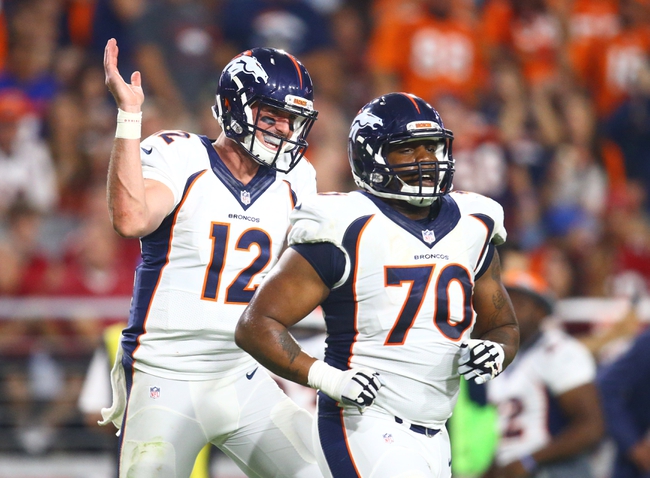 The Denver Broncos host the Arizona Cardinals as both close out their respective 2017 NFL preseasons on Thursday night.

The Arizona Cardinals will look to finish the season above .500 after evening up their record at 2-2 with a 24-14 win over Atlanta in week three. Carson Palmer led the team with 86 yards and a touchdown on 8 of 13 passing, while Blaine Gabbert followed right behind with 84 yards and Drew Stanton threw for 53 yards and a touchdown on 4 of 6 passing. James Summers led the team on the ground with 40 yards on 10 carries with a touchdown. Chris Johnson added 31 yards with 6 carries as well. John Brown turned both of his receptions into touchdowns, racking up 49 yards in the process while Brittan Golden caught a team-high 3 passes. Cap Capi, Xavier Williams, Alex Bazzie and Markus Golden combined for 4 sacks, with Golden forcing a fumble that was recovered by Chandler Jones. Tyrann Mathieu also added an interception in the winning effort for the Cards.

The Denver Broncos will look to finish the preseason with a perfect record after a 20-17 win over the Packers in week three improved their record to 3-0. Trevor Siemian was announced as the opening week starter, and proceeded to put up 127 yards and an interception on 13 of 22 passing. Paxton Lynch, who is expected to be the backup, put up just 9 yards while Kyle Sloter tossed for 49 yards and a touchdown. De’Angelo Henderson and C.J. Anderson each had a team-high 9 carries, with Henderson leading the team with 34 yards but fumbling twice while Anderson put up 31 yards and a touchdown. Jamaal Charles added 27 yards on 4 carries for his new team as well. Hunter Sharp caught a pair of passes for a team-high 41 yards and the Broncos’ lone receiving touchdown. Jordan Taylor caught a team-high 3 passes for 36 yards while Charles, Emmanuel Sanders and Virgil Green all caught a pair of passes as well. Shelby Harris led the team with 3 sacks, while Adam Gotsis and Von Miller each notched a sack of their own as the Broncos held the Packers to just 265 yards of total offense.

The Cardinals have played well, but I’m starting to think that playing an extra game in the hall of fame game may be catching up to Arizona. Combine that with the thin air in Denver and the depth that the Broncos have on defense, and I think it all adds up to a Broncos’ win and cover here.