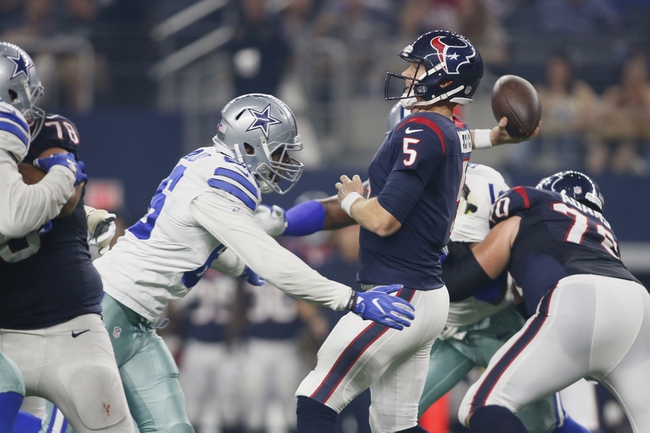 On Thursday out at NRG Stadium, the Dallas Cowboys and the Houston Texans will be meeting up in Week 4 preseason action.

The Cowboys finished first in the NFC East in 2016 with a 13-3 record but faltered in the playoffs with a Divisional Round loss to the Packers. Dallas will reload in 2017 and attempt to better that outcome, and they’ve got some new faces to help. Those fresh names include CB Nolan Carroll, OG Byron Bell, DE Damontre Moore and RB Darren McFadden.

Over on the Texans side, they’re coming off a 9-7 mark in 2016, which was good enough for an AFC South title. Houston beat the Raiders in the Wild Card game, but lost in the Divisional Round to the eventual champion Patriots. The Texans’ big offseason add this year was QB Deshaun Watson, who the team is hoping will be their future at the position.

Injury-wise, both teams have a couple of things to monitor this week. Dallas’ starting LB Anthony Hitchens will be out for eight weeks—and possibly even the season. As for the Texans, their RB corps is thin right now thanks to issues with Alfred Blue and D’Onta Foreman.

We all know how the Week 4 preseason games go: it’ll be mostly bottom-rung guys, and we won’t see much of the starters—if at all. Nothing is guaranteed here, but given the injuries to the Texans running game and Watson’s inexperience, I could easily see a Cowboys victory here. I’ll take Dallas.