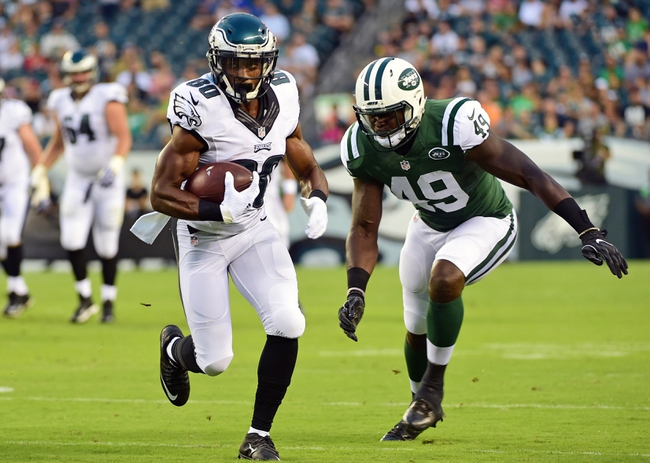 Out at MetLife Stadium in East Rutherford on Thursday, the Philadelphia Eagles and the New York Jets will be wrapping up their NFL preseason activities.

Philadelphia is coming off a disappointing 7-9 season and a fourth-place finish in a tough NFC East during 2016. The Eagles are hoping to reverse their fortunes this year, signing WRs Torrey Smith and Alshon Jeffery in the offseason along with OG Chance Warmack and DE Chris Long.

Over on the Jets’ side, they are currently 1-2 in the preseason thus far. New York won their opener versus the Titans 7-3, then lost to the Lions 16-6 and the Giants 32-31. In that “Snoopy Bowl,” the Jets gave up 19 straight points and were down 29-3 at halftime. Bryce Petty had a great outing statistically however, with 15-of-18 passing, 250 yards and three TDs (and a near-serious injury).

New York is looking to rebound after an ugly 5-11 campaign last year that left them in the basement of the AFC East. The Jets will look very different this year roster-wise, with WRs Brandon Marshall and Eric Decker gone along with QB Ryan Fitzpatrick. New York used their first two draft picks on safeties this year in an attempt to bolster their porous secondary.

Both teams have some injury situations to watch. The Eagles had 11 players out of practice on Sunday, but expect to get 10 of them back for this game (Sidney Jones being the exception). As for the Jets, they will be watching Petty’s knee this week, as well as DE Leonard Williams’ wrist.

Week 4 preseason games are probably the most inaccurate of all when it comes to gauging NFL teams. We’ll be seeing a lot of third- and fourth-string names here, and very little from the impact players. All things considered, however, the Eagles seem to be a deeper and more seasoned team, so I’ll take Philly for the win here.