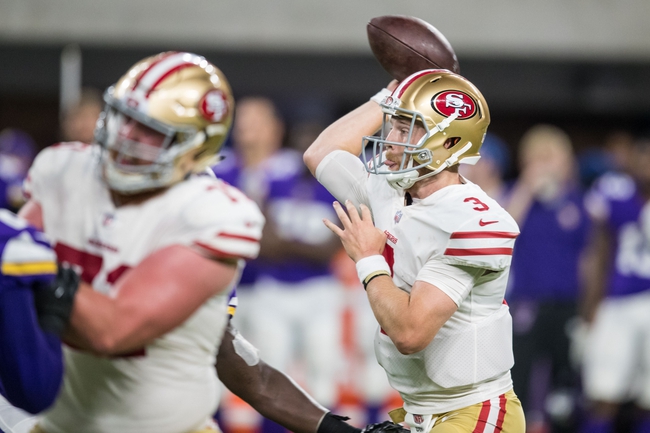 The Los Angeles Chargers and San Francisco 49ers meet Thursday in week 4 of the NFL preseason at Levi's Stadium.

The Los Angeles Chargers are 1-2 in preseason play and their starters will be getting ready for the Denver Broncos week 1. This game won’t be much different for the Chargers considering Phillip Rivers played very little in the first three games. We’re going to see more of Cardale Jones and Mike Bercovici, a duo that was 14 of 22 for 136 yards and an interception last week. Jones, who is still playing catchup after being traded from the Buffalo Bills, has a chance to create distance for the No. 2 job. Defensively, the Chargers have allowed a combined 32 points in their last two games after giving up 48 points in the opener, and they’re coming off a contest in which they had two tackles for loss and forced two turnovers. Regardless, the Chargers have to be pleased being somewhat healthy with the way last year played out. The Los Angeles Chargers have lost five of their last seven preseason games.

The San Francisco 49ers are 1-2 in preseason play and their starters will be getting ready for the Carolina Panthers week 1. With Brian Hoyer likely being the 49ers starter for now, this game will be led by Matt Barkley and rookie C.J. Beathard. That’s a duo that has combined for four touchdown passes and one interception, and Beathard has been quite impressive in his limited reps throughout three games to the point he could earn the backup role if he continues this form. Defensively, the 49ers have given up a combined 65 points in their last two games and have forced a combined two turnovers in all three games. The 49ers have to improve on the defensive end to inspire confidence for the regular season, but at least they’re one of the more healthier teams at the moment. The San Francisco 49ers have split their last 10 preseason games.

The San Francisco 49ers have to have some motivation to bounce back in this preseason game with the way things ended last week against the Minnesota Vikings. Preseason or not, these guys are professional and the backups have to have some sort of pride to get back on the winning side of things. Meanwhile, the Los Angeles Chargers have been one of the worst preseason teams the last couple of years and don't see many victories. So, in a toss-up game, I'll take the 49ers at home and the near pick-em line.