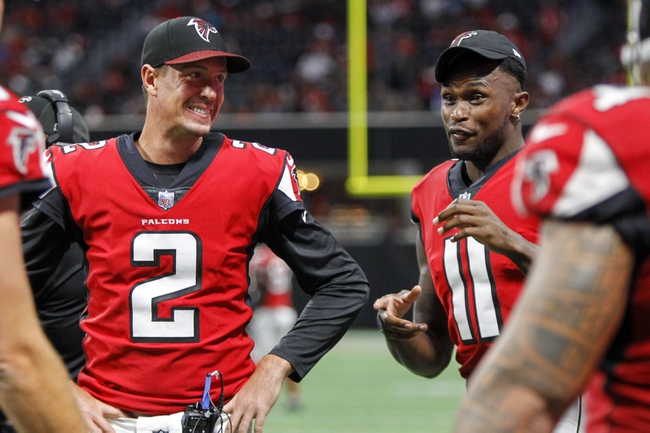 The Atlanta Falcons and the Chicago Bears face off on Sunday to kick off their respective 2017 NFL regular seasons.

The Atlanta Falcons will begin their defense of the NFC crown, but things didn’t get off to the smoothest of starts as the Falcons finished the preseason winless at 0-4 following a 13-7 loss to Jacksonville to close out the season. Matt Ryan will be looking to build on a 2016 campaign that saw him complete just under 70% of his passes while falling just short of the 5,000 yard mark that would’ve been the first time that Ryan joined the 5K club in his career. Devonta Freeman will be looking to put forth a 3rd consecutive 1,000 yard rushing season after racking up 1,079 yards and 11 touchdowns on the ground last season. Julio Jones will return at the leader of the Falcons’ receiving corps, hoping to finish with over 1,000 yards and 6 touchdowns for the 4th straight season. Defensively, the Falcons will be looking to improve on a defense that finished in the bottom 10 in the league in terms of total yardage against, including the 5th-worst passing yards per game mark, allowing 266.7 yards per game through the air last season. The signing of former Chiefs’ pro bowler Dontari Poe, along with returning guys like Vic Beasley Jr. and Desmond Trufant will hopefully also shore up a defensive unit that allowed 25.4 points per game in 2016.

The Chicago Bears had a slightly better preseason than Atlanta, finishing at 2-2, but also ended their preseason campaign with a thud, falling to Cleveland 25-0 in the preseason finale. Mike Glennon comes in as the starting QB after performing well in the preseason, but will have to play well and keep his head on a swivel as 2017 2nd overall pick Mitch Trubisky will be waiting in the wings for his shot after being promoted to backup QB earlier this week. Jordan Howard will be looked on to once again lead the Bears ground attack after a solid rookie campaign in which he rushed for over 1,300 yards and 6 touchdowns. Veterans like Kendall Wright and Zach Miller along with mainstays like Kevin White will hope to fill the void left by former pro-bowler Alshon Jeffery who signed with the Eagles in the offseason. The depth at receiver could prove vital for Glennon, Trubisky or any other quarterback in determining the Bears’ starting quarterback throughout the season. Defensively, the Bears feature key pieces like Quintin Demps, Prince Amukamara, Akiem Hicks and Danny Trevathan who are all responsible for helping the Bears improve on their defensive unit that finished in the middle of the pack last season, allowing 346.8 yards of total offense per game, while featuring a top-10 pass defense that allowed just 224.9 yards per game through the air in 2016.

The Bears may be a sleeper this season, but I have to think that Atlanta will come out with a vengeance in week one, looking for retribution after their epic collapse in the Super Bowl just a few months ago. Plus, the Falcons have some familiarity with Glennon from his time with Tampa Bay, and not much of that was on Glennon’s side. I like the Falcons here to cover with a big statement win to start the year.