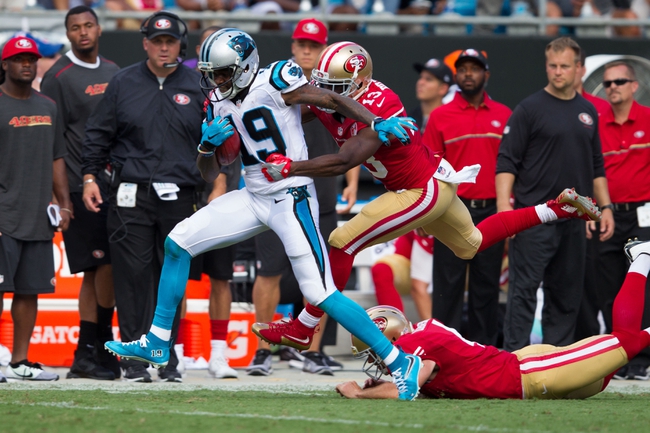 Out in Santa Clara at Levi’s Stadium on Sunday, the Carolina Panthers and the San Francisco 49ers will be kicking off their NFL seasons in Week 1 action.

The Panthers are coming off a disappointing campaign in 2016, finishing 6-10 and in last place in the NFC South. Carolina got off to a 1-5 start and struggled with injuries for much of the year. Notable adds to the team this season include OT Matt Kalil, CB Captain Munnerlyn and OLB Julius Peppers.

The Panthers finished 2-2 in the preseason, recording wins over the Texans 27-17 and the Jaguars 24-23. The pair of losses came against Tennessee 34-27 and Pittsburgh 17-14. In that Steelers game, Panthers QB Joe Webb went 8-for-12 for 88 yards and a TD, but was also picked off twice. Kaelin Clay was Carolina’s leading receiver with three catches for 76 yards.

Over on the 49ers’ side, they’re fresh off a pretty abysmal 2-14 record, with their only two wins coming over the Rams. This led to the firings of Chip Kelly and Trent Baalke. For the 2017 campaign, Kyle Shanahan will take over as head coach, while John Lynch steps into the GM role.

There’s no need to sugar-coat anything here; both of these teams will likely have significant difficulties being competitive this season. If Carolina can stay healthy they may do a little damage, but the Niners seem to be in full-on rebuilding mode. The big issue for the Panthers is keeping Cam Newton (who should play here) healthy. If Newton comes out on the field with little to no rust showing the Panthers have a shot at a dominant win. I’ll take Carolina.