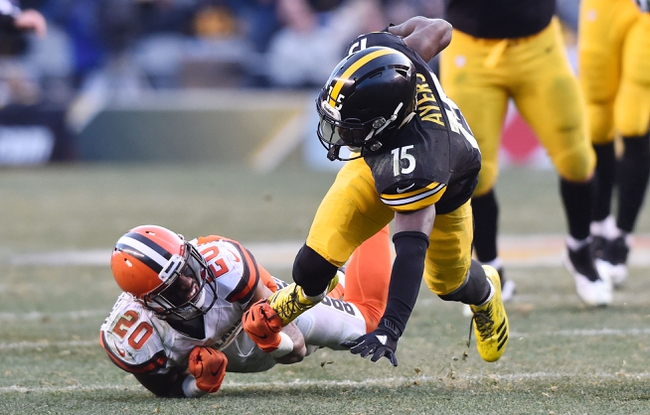 The Pittsburgh Steelers and Cleveland Browns open up the 2017-18 NFL season Sunday at FirstEnergy Stadium.

The Pittsburgh Steelers have won double-digit games each of the last three years and remain as a popular pick to challenge the Patriots for the AFC crown. Le'Veon Bell is back with Pittsburgh after a lengthy holdout, and he helps form one of the best offensives in the league when you include Antonio Brown, Ben Roethlisberger and Martavis Bryant. The Steelers showed just how explosive they can be last season and are capable of moving the chains either through the air or on the ground. Defensively, the Steelers young players such as Stephon Tuitt, Ryan Shazier and Bud Dupree are only getting better, and the addition of cornerback Joe Haden, who was released by the Browns, can’t hurt. Last season, the Steelers were 10th in points allowed and 12th in yards allowed. The Pittsburgh Steelers have won four straight regular season road games.

The Cleveland Browns have won a combined four games the last two seasons and it feels like there’s pressure on second-year coach Hue Jackson to show progress. The Browns will be rolling the dice with rookie quarterback DeShone Kizer, and he looked sharp in the preseason and can make plays with his legs. There are also nice weapons to help him out with rookie tight end David Njoku and wide receiver Kenny Britt, while the offensive line should improve with additions of JC Tretter and Kevin Zeitler. Defensively, the Browns bulked up their secondary with Calvin Pryor and Jason McCourty, and first overall pick defensive end Myles Garrett adds a much needed playmaker on the defensive side of the ball. Last year, the Browns were 30th in points allowed and 31st in yards allowed, so there’s only one way to go with this unit. The Cleveland Browns have lost 13 of their last 15 regular season home games.

The Cleveland Browns are going to be better than a lot of people expect, and I'm talking about winning at least five or six games. The Browns defense improved with some of their additions and Kizer has the playmaking ability and can throw the football better than anybody who has started in recent years for this struggling franchise. Yes, the Steelers are the still the better team overall and far more proven. Pittsburgh has also treated the Browns as a punching bag over the years. However, nine points in a season opener on the road? That's too much for me to lay. The Browns are going to surprise some folks this season, so I'll take my chances with the nine points.