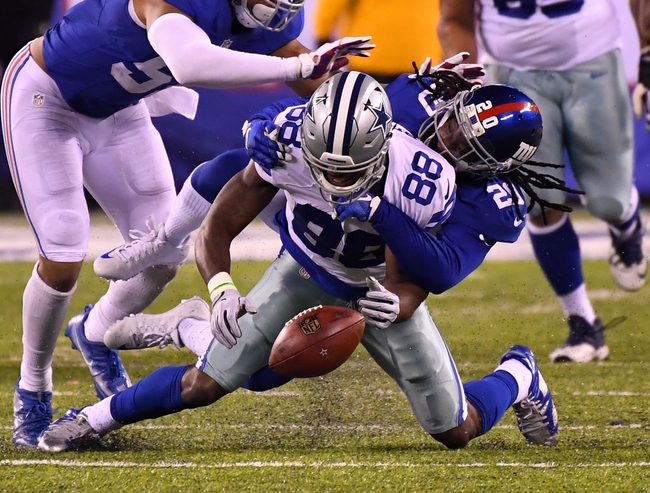 One of the NFL’s hottest rivalries takes center stage in week one’s installment of Sunday Night Football as the Dallas Cowboys host the New York Giants at AT&T Stadium.

The New York Giants will look to start strong after finishing the preseason with a 2-2 record after arguably the most exciting game of the 2017 preseason, a 40-38 win over the Patriots in their preseason finale. All three Giants’ QBs that saw the field threw for 100+ yards, with Josh Johnson leading the team with 135 yards and a touchdown on 11 of 14 passing. Geno Smith threw 10 completions on 11 attempts for 111 yards and a score while Davis Webb threw for 103 yards while leading the G-Men on the game-winning drive in the 4th. Shaun Draughn saw the bulk of the workload for the Giants, taking his 14 carries and turning them into 54 yards and a touchdown, while Orleans Darkwa followed with 6 carries for 40 yards including a 21-yard scamper. Matt LaCosse had a solid day for New York’s receiving corps, hauling in 5 passes for 60 yards and a pair of touchdowns. Will Tye also caught 4 passes for 48 yards but also coughed the ball up with a fumble. Defensively, a Robert Thomas sack, a Kerry Wynn interception combined with a pair of forced fumbles and a fumble recovery highlighted an otherwise poor defensive showing from the Giants, allowing over 400 yards of total offense, including 341 yards and 4 touchdowns to Pats’ third-string QB Jacoby Brissett.

The Dallas Cowboys had their preseason finale in Houston cancelled because of Hurricane Harvey sweeping through Houston, leaving the Cowboys with a 3-1 preseason record thanks to their 24-20 win over the Raiders in week three. Cooper Rush hada solid showing in relief of starting QB Dak Prescott, throwing for 115 yards and a pair of touchdowns on 12 of 13 passing. Prescott left after completing 11 of 14 passes for 113 yards and a touchdown of his own. Alfred Morris led the team with 9 carries for 56 yards, while Ezekiel Elliott, who could potentially miss up to the first six weeks of the regular season, pending a ruling from an arbitration judge, racked up 18 yards with his 5 carries in the win. Jason Witten far and away led the Cowboys’ receiving crew, going for 6 receptions, 74 yards and a touchdown. Lance Lenoir caught a pair of passed for 49 yards and a score while Ronnie Hillman caught 4 passes out of the backfield for 23 yards and a score. Defensively, the Cowboys combined for 3 sacks, with Damontre’ Moore also forcing a fumble in addition to his sack of Raiders’ QB Connor Cook.

My pick could change based on the ruling of the Elliott suspension appeal, but if he does end up missing this game, I think the Cowboys are in trouble and will turn into a one-dimensional team through the air. New York’s preseason shootout finale doesn’t instill much confidence that they’d be able to stop the pass, but the giants can hang offensively and have had the bulk of the success in this matchup, so for now, I’ll take a shot with the Giants and the points.