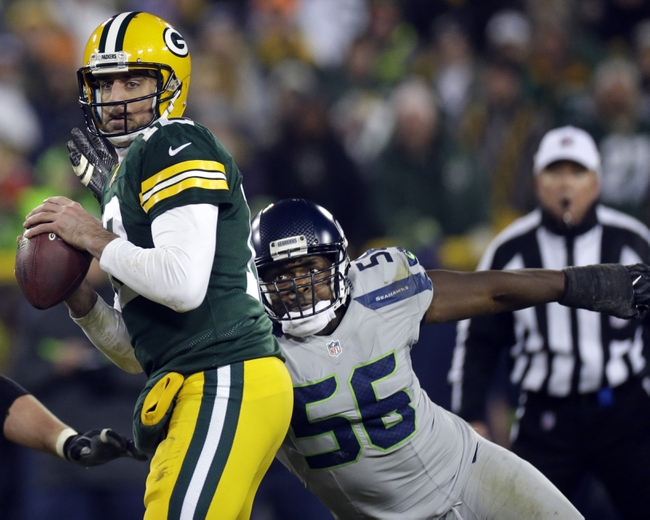 The Seattle Seahawks face off against the Green Bay Packers in one of the marquee week one NFL matchups from Lambeau Field on Sunday afternoon.

The Seattle Seahawks will look to continue their momentum heading into the regular season after a 17-13 win over Oakland in their preseason finale gave the Seahawks a perfect 4-0 record heading into week one. Trevone Boykin threw for 166 yards, a touchdown and two interceptions on 13 of 21 passing. Austin Davis also threw for a score, completing 10 of 16 pass attempts for 123 yards in the win. Boykin also led Seattle on the ground, taking his 4 carries and racking up 42 yards. Kasen Williams logged a team-high 57 yards with his two receptions, while Kenny Lawler Jr. and Rodney Smith each ended up on the receiving end of a touchdown hookup. Defensively, Mike Morgan logged a sack and a forced fumble, one of three forced fumbles by Seattle in the win. Otha Peters also recorded an interception of Raiders’ QB Connor Cook as the Seahawks allowed 290 yards of total offense in the win.

The Green Bay Packers will also look to start strong after finishing the preseason at 3-1 thanks to a 24-10 win over the Rams in the preseason finale. Brett Hundley led the team with 99 yards and a touchdown on 11 of 21 passing but also took his lone rush 13 yards for a rushing TD as well. Taysom Hill looked solid in limited action, going 4 for 4 for 31 yards and a touchdown also. Aaron Jones led the Pack in rushing with 48 yards on 8 carries while also notching a 1-yard TD grab, while Jamaal Williams used his team-leading 11 carries for 31 yards. Devante Mays led the Pack with a pair of receptions out of the backfield for 36 yards, and Aaron Peck caught a TD of his own early in the 4th to seal the win. Ladarius Gunter notched a sack and an interception while Donatello Brown added an interception of his own as the Pakcers allowed just 210 yards of total offense in the victory.

I have this as my personal game of the week, as you have a pair of solid all-around teams going head-to-head in a potential NFC championship game preview. However, Seattle has struggled at Lambeau which is always a tough place to go on the road and win, and the line is low enough that I think the Packers are a strong play here to open the season with a win and cover here.