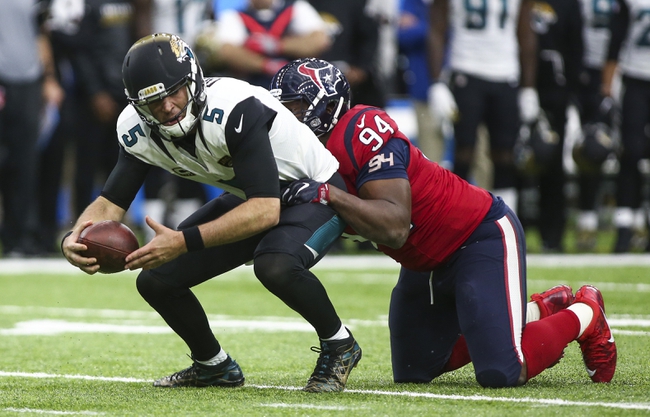 The Jacksonville Jaguars and Houston Texans open up the 2017-18 NFL season Sunday at NRG Stadium.

The Jacksonville Jaguars haven’t made the playoffs since 2007 and have nowhere to go but up after just three wins last season. The Jaguars have some talent on the offensive end led by Allen Robinson, Allen Hurns and the newly drafted Leonard Fournette. However, none of that matters if quarterback Blake Bortles can’t show signs of progress. Bortles has yet to prove he’s a franchise quaterback and you could make a strong argument that Chad Henne should be the starter in Jacksonville right now. Defensively, Jacksonville added All-Pro defensive end Calais Campbell, and he could form a dangerous defensive line along with Dante Fowler Jr. and Sheldon Day. The Jags were 25th in points allowed but just sixth in yards allowed last season, so there is some hope on that side of the ball. The Jacksonville Jaguars have lost six straight regular season road games.

The Houston Texans have won nine games each of the last three seasons and can make the playoffs for a third straight year for the first time in franchise history. Tom Savage will get the start for Houston after being pushed by rookie Deshaun Watson, and he has a lot of familiar faces around him in running back Lamar Miller and wide receivers DeAndre Hopkins and Braxton Miller. The Texans also have a proven offensive line with Duane Brown and Nick Martin aching the unit for another year. However, the Texans are truly led by possibly the best defense in the league, as Houston was first in fewest yards allowed, and that was with playing without J.J. Watt for much of the year. With everybody back another year, the Texans won’t give up anything easy this season. The Houston Texans have won eight of their last nine regular season home games.

The Texans have beaten the Jaguars in each of the last six meetings and that should continue as long as Jacksonville still has Bortles at quarterback. Houston has an offense with playmakers and possibly the best defense in the league. Jacksonville has had success moving the ball against the Texans in the past, but it's tough seeing them pull off this road victory. This game reminds me of when the Saints returned home after missing so much time due to Hurricane Katrina. The crowd was out of its mind, the players fed off of it and the Falcons had no chance. This crowd will bring something special and you better believe the Texans are going to ride it for 60 minutes.

The Texans blow this game open.