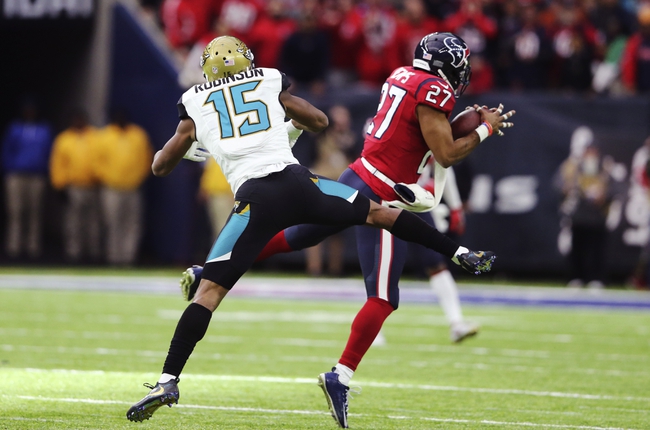 The Jacksonville Jaguars and the Houston Texans face off in AFC South division action to kick off their respective 2017 NFL regular seasons.

The Jacksonville Jaguars hope to start the season on a positive note after finishing the preseason with a .500 record at 2-2 after winning their preseason finale by a final score of 13-7 over Atlanta. Blake Bortles takes the reins for his 4th season, after throwing for over 3,900 yards, 23 touchdowns and 16 interceptions for the Jags last season. Jacksonville used their will look to prove that he was worth the 4th overall draft pick in 2017 that the Jags used to select him out of Louisiana State University after finishing with 843 yards and 8 touchdowns in an injury-shortened 2016 season for the Tigers. Marqise Lee and Allen Robinson will look to head the Jaguars’ receiving corps after combining for over 1,700 yards and 9 touchdown grabs last season. Defensively, the Jags will look to Calais Campbell, Paul Posluszny and Myles Jack to head up a front seven for Jacksonville’s defense that finished 6th in the NFL last season, allowing just 321.7 yards of total offense per game last year. Jalen Ramsey will hope for more success in his sophomore season, after leading a Jacksonville secondary that was 5th in the NFL against the pass last season, giving up just 215.3 passing yards per game.

The Houston Texans will look to defend their AFC south crown, and will hope to start the regular season than they did the preseason, finishing at 1-2 before having their finale cancelled due to Hurricane Harvey. Tom Savage was announced as the team’s starter, beating out rookie and national championship winning QB Dedhaun Watson for the starting job in week one. Savage played in just 2 games for Houston last season, throwing for 461 yards while completing 63% of his pass attempts. Lamar Miller returns as the expected starting running back for week 1 after rushing for over 1,000 yards and 5 touchdowns last season. DeAndre Hopkins will be in charge of leading one of the more athletic receiving groups in the NFL, with the likes of Braxton Miller and Jaelen Strong alongside Hopkins. Defensively, the main question is will this finally be the year that Texans fans can see J.J. Watt and Jadaveon Clowney on the field at the same time wreaking havoc on opposing offenses? Well it would help if the Texans were going to hold their spot atop the defensive mountain, just one year removed from leading the NFL in total yardage against, giving up just 301.3 yards of total offense per game.

I have had high hopes for the Jags coming into the last couple of seasons, only to have it blow up in my face in week one. I’d feel a lot better about Houston if it was Watson starting ahead of Savage, but nonetheless, I think the Texans have the bigger advantage on both sides of the football, and should be able to take this one by a touchdown.