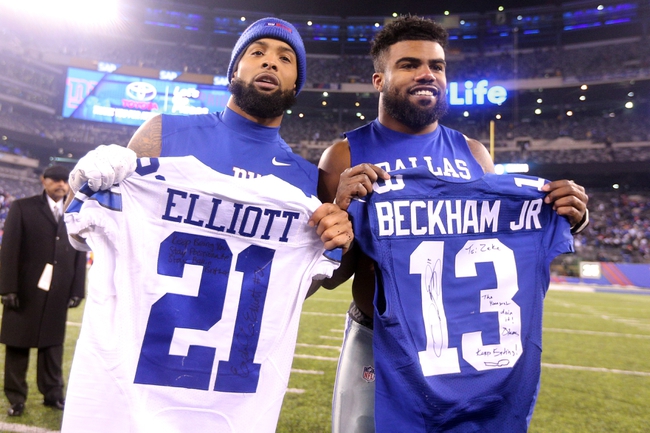 The Dallas Cowboys and New York Giants cap off a busy opening Sunday of NFL action as they meet up in Dallas for Sunday Night Football.

The Giants head into Jerry’s World and AT&T Stadium on Sunday night looking to silence the crowd and grab a huge opening weekend victory against their division rivals in what is one of the most anticipated matchups of a busy opening weekend. New York made a splash last season thanks in large part to their defense and they are among a handful of teams that are considered to be a contender for the Lombardi Trophy this season as they have the personnel and pedigree to win a championship. New York is led by Eli Manning, Odell Beckham, and Brandon Marshall on offense and the likes of Oilvier Vernon, Janoris Jenkins, and Jason Pierre-Paul on defense which makes them one of the most balanced teams in the NFC and if they can go into Dallas and leave with a huge victory like the Chiefs did to the defending champions on Thursday it could very well shift the landscape and conversation of who the team to beat is in the NFC.

The Cowboys meanwhile received huge news on Friday night as it was learned that Ezekiel Elliott is likely to play the duration of the season after his court matters took another turn, and while his off field troubles can’t be ignored he is certainly among the league’s best backs and immediately gives the Cowboys a huge shot in the arm. Elliott, Dez Bryant, and Dak Prescott will be leaned on heavily to carry this team back to the playoffs and they certainly have the roster to make a push, but they still play in a very tough division as all four teams could make a case for being the NFC East’s best and this game certainly is a show case for Dallas to prove they are the team to beat. While Elliott is a full go in this one it is uncertain whether or not Beckham will be healthy enough to go and that could make a huge difference in the outcome of this one.