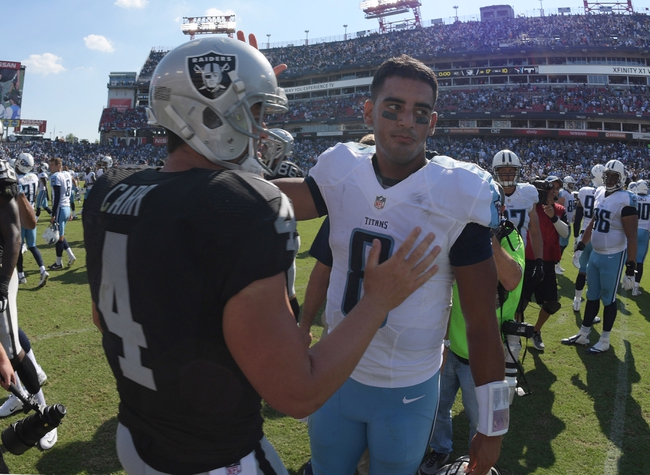 The Oakland Raiders head into the Music City on Sunday looking to pull off the mild upset on the road against the Tennessee Titans.

The Raiders come into this season with as much hype and promise as anyone in the NFL as they are considered a heavy favourite to to make a push in the AFC playoff picture, and are just behind the Pats and Packers in terms of Super Bowl wagers. Oakland made massive strides last season and could very well have unseated the Pats had Derek Carr not gone down with a broken foot, but he is back and healthy now and the Silver and Black’s high octane offense should be in line for another productive season. The Raiders also added Marshawn Lynch to their back field and if they can get improved defense from anyone not named Khalil Mack they should be in a good spot in the crowded AFC West. They face a stiff test in week one though on the road against a Titans team that looks a lot like last year’s Raiders, as they are this season’s projected breakout group and should be in the mix for the AFC South crown.

The Titans will look to avenge last year’s 17-10 loss at the hands of the Raiders and they should be better prepared this time around as Marcus Mariota is a year older and has plenty of weapons at his disposal, both through the air and on the ground. Demarco Murray and Derrick Henry headline a solid ground game and the addition of Eric Decker and Corey Davis to their receiving corps puts the Titans in a nice position offensively but they will have to keep the Raiders off the field as their offense will put them in a position to not only get a win but a comfortable one at that. This game is shaping up to be decided by a late field goal or a potential for a game winning drive but with the line being so small it doesn’t help us to have that mind set.