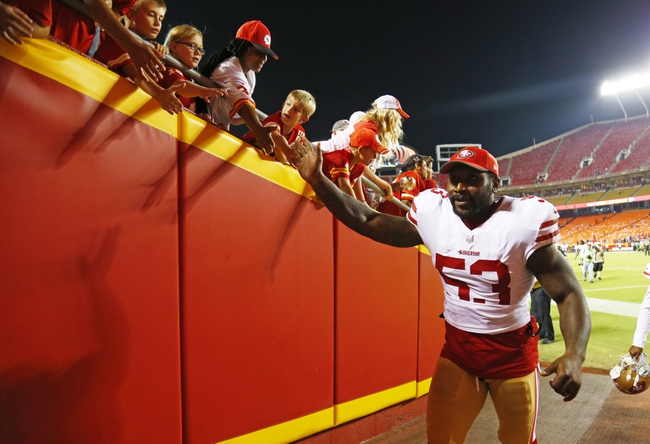 The Carolina Panthers and San Francisco 49ers open up the 2017-18 NFL season Sunday at Levi's Stadium.

The Carolina Panthers hope last season was just a fluke after going from the Super Bowl to winning just six games. Of course, the Panthers are likely only going as far as Cam Newton leads, and he’s coming off a shoulder injury that allowed him to see very few reps in the preseason. Assuming Newton is ready to go, he has a few new weapons to help take pressure off in rookie running back Christian McCaffrey and wide receivers Russell Shepard and Curtis Samuel. Pro bowler Matt Kalil should also help improve a Carolina offensive line that’s been rough over the years. Defensively, the Panthers may have the best linebacking corps in the league with Luke Kuechly, Thomas Davis and Shaq Thompson returning for another season. The Panthers were also fourth in the league last season with 17 interceptions. The Carolina Panthers have lost seven of their last nine regular season road games.

The San Francisco 49ers have nowhere to go but up after winning a combined 15 games the last three seasons and having yet another new head coach in Kyle Shanahan. This is the fourth straight season the 49ers have had a different coach. As for the roster, Brian Hoyer or rookie C.J. Beathard could see time at quarterback, and there are newly acquired weapons in wide receivers Pierre Garcon and Marquise Goodwin. Tim Hightower forms a nice 1-2 punch at running back with Carlos Hyde and Brandon Fusco should help improve the offensive line. Defensively, having a healthy NaVorro Bowman helps tremendously, while the draft selections of Reuben Foster and Solomon Thomas are sure to pay off immediately. However, it’s important to remember that no team in the NFL allowed more yards than the 49ers did last season. The San Francisco 49ers have lost seven straight regular season home games.

I'm going to assume Newton is healthy and ready to go and will be in regular season form in no time. If that's the case, the Panthers should have little trouble with the 49ers even if this game is on the road. The San Francisco 49ers now have a head coach who will put guys in the best position to make plays, but there's not as much talent on this roster as there was in Atlanta, and the 49ers still don't have a quarterback. The Carolina Panthers are the better team from top to bottom and should be eager for a fast start with the way things played out last year. So, I'll take Carolina by a touchdown here.