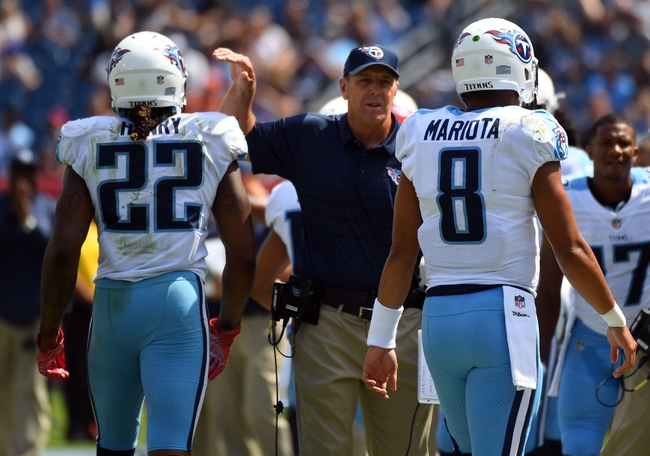 The Oakland Raiders and Tennessee Titans open up the 2017-18 NFL season Sunday at Nissan Stadium.

The Oakland Raiders are coming off a 12-win season and have quickly become the trendy pick with bettors to win the Super Bowl. The Raiders already had an explosive offense with Derek Carr, Amari Cooper, Michael Crabtree and others throwing the ball around the yard, but now they added a physical and emotional runner in Marshawn Lynch. While some question what Lynch has left in the tank after coming out of retirement, he does add another dimension to this Oakland offense and is sure to energize the crowd considering he’s from the area and is passionate about the city. Defensively, there’s potential with Khalil Mack, Bruce Irvin and Karl Joseph leading their respective units. However, the Raiders were 20th in points allowed per game and 26th in total yards allowed last season, areas that have to be cleaned up if they’re going to reach the big game. The Oakland Raiders have won seven of their last 10 regular season road games.

The Tennessee Titans won nine games last season and are quietly becoming that sleeper team in the AFC. There’s a lot to like with the Titans, as Marcus Mariota is quickly coming into his own, and he has more weapons than ever before with the additions of wide receivers Corey Davis and Eric Decker. The Titans were 14th in the NFL last season in points scored, so they could take another step with above-average WRs. It also doesn’t hurt to have another year of running back duo DeMarco Murray and Derrick Henry, a combination that produced more than 1,700 rushing yards and 14 touchdowns. Defensively, the Titans have two playmaking linebackers in Derrick Morgan and Brian Orakpo, and they bulked up their secondary by adding Logan Ryan, Johnathan Cyprien and drafting Adoree' Jackson. Last year, the Titans were 20th in total yards allowed and 17th in points per game allowed. The Tennessee Titans have won four straight regular season home games.

I know the Raiders are the popular pick with the public because they light up the scoreboard and are a fun team to watch, but the Titans may be the more talented team overall and have this toughness about them that makes them really interesting. I'm quite high on these Titans and could easily see double-digit victories this season. I still have concerns with the Raiders defensively, and I don't feel any more confident going up against Mariota and his playmaking ability along with a powerful running game. I like the Titans to get physical and grind out a victory here.