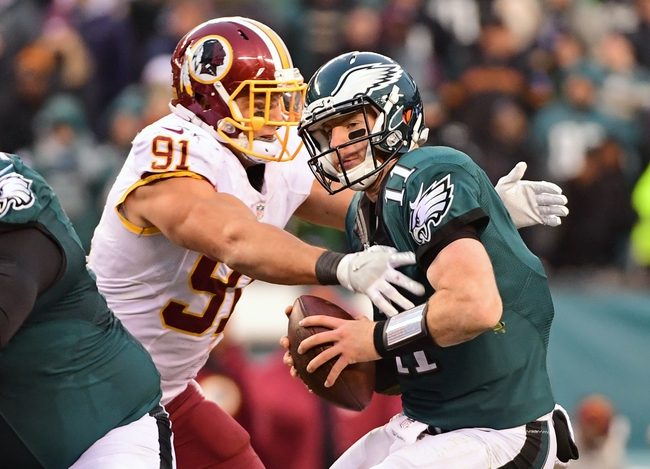 On Sunday, September 10 in Week 1 NFL action, the Philadelphia Eagles and the Washington Redskins will be meeting up at FedEx Field.

The Eagles went 2-2 in the preseason this year, losing to the Packers in Week 1 and the Jets in Week 4, while beating the Bills and Dolphins in between. In the Week 4 New York game, Philly lost 16-10, but WR Marcus Johnson snagged a 41-yard touchdown in the fourth quarter.

Last season, the Eagles finished 7-9 and in last place in a tough NFC East despite starting 3-0. Philadelphia has now missed out on the playoffs in three straight years. The Eagles loaded up on a few guys in the offseason ahead of the 2017 campaign, including WRs Alshon Jeffery and Torrey Smith, as well as QB Nick Foles and DE Chris Long.

Over on the Redskins’ side, they’re fresh off a 2-2 preseason, losing to the Ravens and Packers before getting wins over the Bengals and Buccaneers. In that Week 4 game, the Redskins won 13-10, with QB Nick Sudfeld bagging a 22-of-33 line for 228 yards.

In the 2016 campaign, the Redskins finished 8-7-1 overall and in third place in the NFC East. Still, that made two straight winning seasons for the Redskins, the first time that’s happened since 1996-97. Notable fresh names this year for Washington include DT Stacy McGee, DT Terrell McClain and WR Terrell Pryor.

All things considered, the Eagles and Redskins won’t get much press this year with the Giants and Cowboys both heavy favorites to make the playoffs and battle it out for the top seed in the division. Still, there are positive signs for improvement on both sides here and each team could make great strides this season. Overall, the Redskins look like the more solid squad right now, and in a comfortable home game in Week 1 here it’s theirs to lose. Give me Washington.