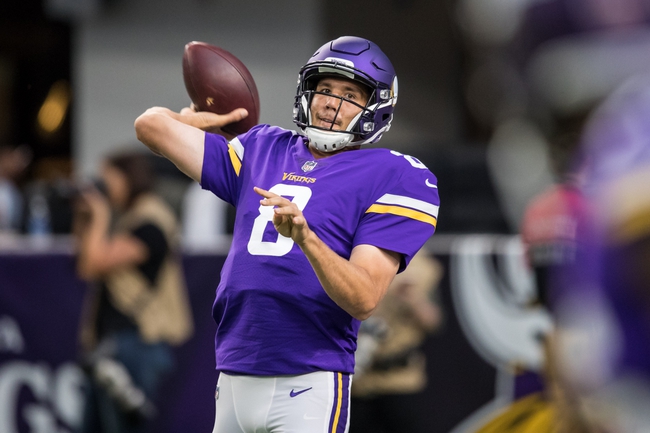 The New Orleans Saints and Minnesota Vikings open up the 2017-18 NFL season Monday at U.S. Bank Stadium on ESPN.

The New Orleans Saints hope to get things back on the right track after missing the playoffs each of the last three seasons. The Saints always have a chance to win as long as Drew Brees is leading the way, and he’s back for yet another season. Bree did lose his top receiver in Brandin Cooks, but the additions of wide receiver Ted Ginn Jr. and running back Adrian Peterson will certainly help out the future Hall of Famer. Adding Ryan Ramczyk and Larry Warford should also help improve a New Orleans offensive line that wasn’t great last season. Defensively, the Saints have been one of the worst units in the league for quite some time, which is why they drafted heavy on that side of the ball and are likely going to start Marshon Lattimore and Marcus Williams. The Saints have to be better defensively if this season is going to be better than the past three. The New Orleans Saints have lost four of their last six regular season road games.

The Minnesota Vikings have missed the playoffs three of the last four years but continue to be a trendy Super Bowl pick if they can just find a QB. Teddy Bridgewater is likely out for the year, which means it’s another season of Sam Bradford. A combination of Latavius Murray and Dalvin Cook replaces Peterson, while Stefon Diggs and Kyle Rudolph continue to be highly productive in the receiving department. The Vikings have more than enough weapons offensively to do damage, but it comes down to how effective Bradford can be, and if a new offensive line that includes Riley Reiff, Pat Elflein and Mike Remmers can gell in time. Defensively, the Vikings are pretty much the same elite they were a year ago with playmakers Danielle Hunter, Xavier Rhodes and Anthony Barr leading the way. Remember, the Vikings were fifth in the NFL last year with 41 sacks and third in total yards allowed. The Minnesota Vikings have won five of their last eight regular season home games.

The Vikings are legit Super Bowl contenders if they can simply find some consistency at the quarterback position. Minnesota is better offensively with added depth at running back and the defense is argubaly the best in the league. The Saints are pretty much what they've been over the years, Brees or bust, and that's simply not going to get it done most nights, especially on the road. The Vikings defense will feast on that New Orleans offensive line, and the Vikings have possibly the best home crowd in the league, which only makes things tougher for the Saints. The Vikings and the reasonable line is the way to go here.