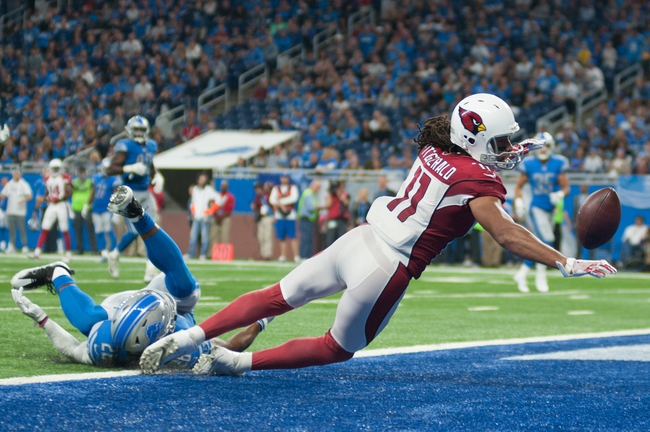 The Arizona Cardinals and the Indianapolis Colts face off in week 2 NFL action from Lucas Oil Stadium on Sunday afternoon.

The Arizona Cardinals will look to bounce back after dropping their season opener by a final score of 35-23 at the hands of the Detroit Lions. Carson Palmer threw for 269 yards, a touchdown and 3 interceptions on 27 of 48 passing. David Johnson led a disappointing effort from Arizona’s ground attack, racking up 23 yards on 11 carries before exiting the game with a dislocated wrist. Larry Fitzgerald led the team with 74 yards on 6 receptions while J.J. Nelson hauled in 5 balls for 43 yards and a touchdown in the loss. Defensively, a Justin Bethel pick-six to open the scoring and a sack from Chandler Jones highlighted a frustrating performance from the Cardinals’ defense, allowing 367 yards of total offense while giving up 20 unanswered points in the 4th quarter en route to the loss.

The Indianapolis Colts will also look to rebound after suffering the worst loss of any team in week 1 on the scoreboard, falling by a final count of 46-9 at the hands of the L.A. Rams. Scott Tolzien threw for just 128 yards and a pair of interceptions, completing 9 of 18 pass attempts. Frank Gore racked up 42 yards on 10 carries while Marlon Mack logged 24 yards and the team’s lone touchdown of the game with his 10 touches. T.Y. Hilton led the Colts with 3 catches for 57 yards while Donte Moncrief’s lone reception went for 50. On the defensive end, a Margus Hunt sack alone with a Darius Butler forced fumble that was recovered by Jeremiah George were the only highlights as the Rams logged 373 yards of total offense, including 310 yards through the air.

With Andrew Luck out, I have zero faith in the Colts, and are a must-fade until he returns to the lineup. Arizona just caught some bad breaks in week one, including losing David Johnson. However, I think the loss of Luck far outweighs the loss of Johnson, and the Cardinals should roll to victory quite easily in this one so I’ll lay the points.