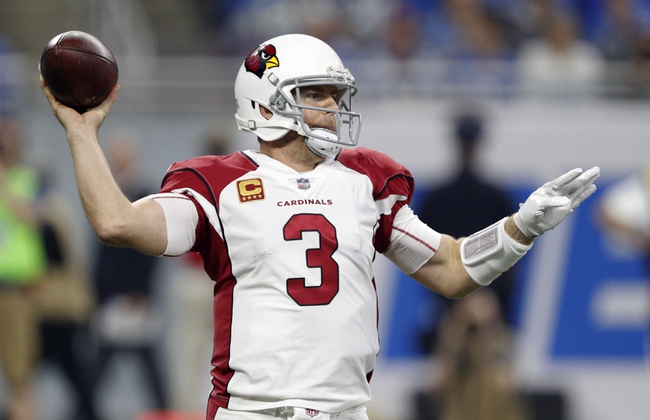 On Sunday, September 17 out at Lucas Oil Stadium, the Arizona Cardinals and the Indianapolis Colts will be meeting up in Week 2 NFL action.

The Cardinals are sitting at 0-1 on the season so far following a 35-23 loss to the Lions in the opener. In that game, Arizona QB Carson Palmer finished 27-of-48 for 269 yards, one TD and three picks. WR Larry Fitzgerald led the Cardinals with six receptions and 74 yards, but the big news here is the loss of top Cardinals RB David Johnson, who suffered a wrist injury.

Arizona is coming off a 7-8-1 mark in 2016, finishing second in the NFC West. Palmer was injured during the season, which marred the campaign.

Over on the Colts’ side, they’re currently 0-1 as well following a 46-9 beatdown at the hands of the Rams. In that loss, Indianapolis QB Scott Tolzien went 9-of-18 for 128 yards and two picks, while Frank Gore led the Colts in rushing with 10 carries for 42 yards.

Indianapolis managed to go 8-8 last season and were in third place in the AFC South. The Colts failed to make the postseason for the second consecutive year, the first time since 1997-98 that that’s happened.

Both of these teams suffered bad losses in Week 1, and will likely carry that hangover into this game. With Johnson hurt, Arizona’s running game takes a major hit, and Palmer was less than stellar in Week 1. The good news for the Cardinals here is that the Colts will be without QB Andrew Luck once again, which is going to severely limit Indianapolis’ offensive capabilities. I’ll take the Cardinals to cover in this matchup.