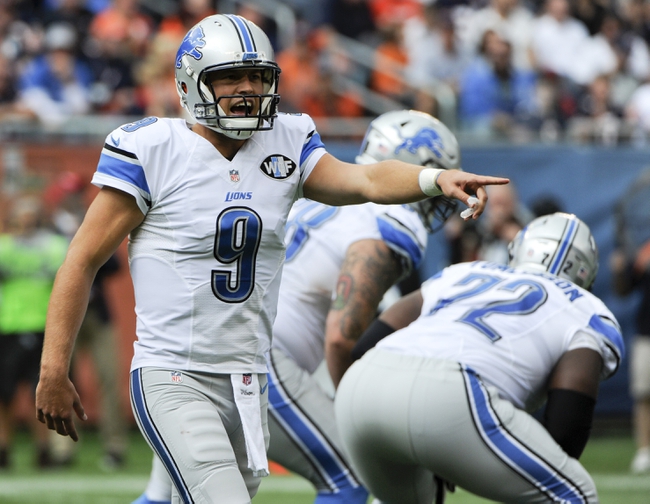 The Detroit Lions and the New York Giants close out week 2 of NFL action by squaring off at MetLife Stadium on Monday Night Football.

The Detroit Lions will look to improve on their strong start, defeating the Arizona Cardinals by a final score of 35-23. Matthew Stafford completed 29 of his 41 pass attempts for 292 yards, 4 touchdowns and an interception. Ameer Abdullah turned his team-leading 15 carries into 30 yards while Dwayne Washington added 22 yards on 6 carries of his own. Golden Tate far and away led the Lions’ receivers, hauling in 10 passes for 107 yards, while Kenny Golladay logged 4 catches for 69 yards and a pair of touchdowns. Marvin Jones Jr. and Theo Riddick also caught a touchdown pass from Stafford in the win. Defensively, the Lions combined to pick off Cardinals QB Carson Palmer 3 times, while also adding an Anthony Zettel sack and a pair of forced fumbles, one of which was recovered by Jarrad Davis who also led Detroit with 9 tackles.

The New York Giants will look to bounce back after falling to Dallas by a final score of 19-3 in the opening week edition of Sunday Night Football. Eli Manning completed 29 of 38 passes for 220 yards and an interception, while the G-Men’s ground game was practically non-existent as New York combined for just 35 rushing yards on 12 carries. Roger Lewis led the team with 54 receiving yards on 4 catches, while Shane Vereen hauled in a team-high 9 balls for 51 yards and Sterling Shepard caught 7 passes for 44 yards, the same amount of yardage logged by rookie Evan Engram in his NFL debut for Big Blue. Defensively, an Olivier Vernon sack was the lone highlight in an otherwise below average performance as the Giants allowed 392 yards of total offense in the loss.

I’m not sure why the Giants are favored here to be honest. Yeah, New York is at home, but the Giants looked awful in their opener and if Odell Beckham Jr. misses this game as well, I’m afraid we will see more of the same from the Giants. Detroit was firing on almost all cylinders in week 1, they just need to get the run game going but that will come as the season rolls on. Add in the fact that the road team has had the bulk of the success in this matchup and that I think Detroit is the better team here, I think the pick is simple. Take the Lions and the points in a game Detroit could win outright.