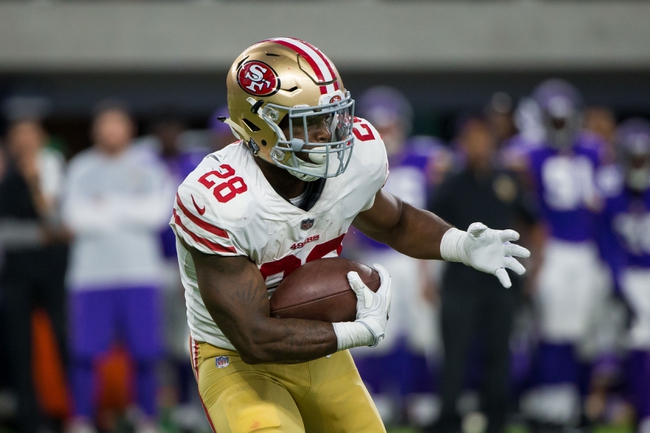 Out at Levi’s Stadium in Santa Clara on Thursday, we’ve got Week 3 NFL action coming between the Los Angeles Rams and the San Francisco 49ers.

The Rams are currently 1-1 this season following a 46-9 blowout of the Colts in the opener and a tough 27-20 loss to the Redskins this past Sunday. In that Redskins game, Rams QB Jared Goff finished 15-of-25 for 224 yards, a TD and a pick, while Todd Gurley was the top rusher on 16 carries for 88 yards and a TD. Gerald Everett was LA’s lead receiver with three catches for 95 yards.

So far this season, Goff has 530 yards and a pair of touchdowns, while Gurley is the top Rams rusher with 35 carries for 128 yards and two scores. Everett has four receptions on four targets through two games, totaling in 134 yards overall—but no TDs just yet.

Over on the 49ers side, they’re currently 0-2 after a 23-3 loss to the Panthers in Week 1 and a 12-9 loss to the Seahawks in the second game. In that Seattle matchup, Niners QB Brian Hoyer went 15-of-27 for 99 yards and a pick, while Carlos Hyde posted 15 carries for 124 yards overall. Pierre Garcon and Marquise Goodwin both put up three catches for 26 yards to lead the 49ers on a rough receiving day.

This year, Hoyer has put up 292 yards and a pair of picks so far through two games for San Francisco, and Hyde has 24 attempts for 169 yards on the ground. Garcon is the leading Niners receiver with his 107 yards on nine receptions and 15 targets.

We’re starting to see what this year’s Rams team is going to look like, and there are some positives here. LA took care of business against a bad Colts squad, then showed some offensive promise in Week 2 despite losing the game. As for the 49ers, they’re something of a train wreck right now, and the first thing you can point to is the lack of a touchdown from anyone this season. Hyde and Garcon are both playing fairly well so far, but with no passing game to speak of there’s not much hope for either of them getting numbers. I cant’ find too many reasons to pick against the Rams here, especially with the line being so thin.