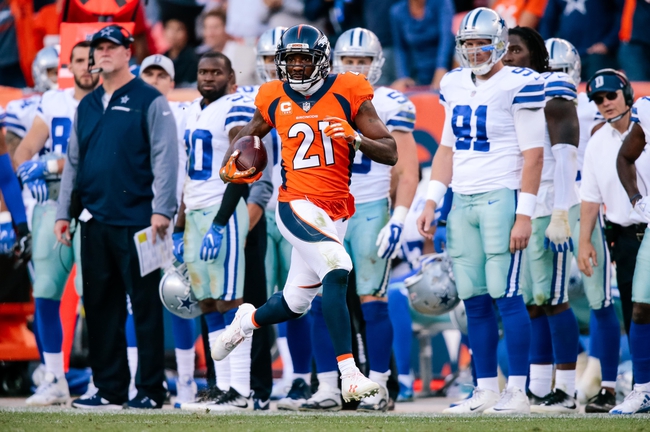 The Denver Broncos and the Buffalo Bills face off in week 3 NFL action from New Era Field on Sunday afternoon.

The Denver Broncos come into this one looking to remain unbeaten after improving to 2-0 this season following their 42-17 beatdown of Dallas in week 2. Trevor Siemian threw for 231 yards, 4 touchdowns and an interception on 22 of 32 passing. C.J. Anderson racked up 118 yards and a touchdown on 25 carries, while Jamaal Charles put up 46 yards on 9 carries. Demaryius Thomas led the team with 71 receiving yards on 6 receptions, while Emmanuel Sanders caught 6 balls of his own for 62 yards and 2 tocuhdowns. C.J. Anderson also added a receiving touchdown out of the backfield while Virgil Green caught a TD pass as well. Von Miller added a pair of sacks and the Broncos combined for a pair of interceptions while holding Dallas to just 268 yards of total offense, holding the Cowboys to a 3 for 14 mark on 3rd down.

The Buffalo Bills will look to bounce back after dropping to 1-1 following a 9-3 loss to Carolina in week 2. Tyrod Taylor threw for 125 yards on 17 of 25 passing while also leading the Bills with 55 yards on 8 carries. LeSean McCoy chipped in a puny 9 yards rushing on 12 carries, but also led the team in receiving with 6 catches out of the backfield for 34 yards. Defensively, the Bills put forth a solid performance, holding the Panthers to just 255 yards of total offense while also combining for a whopping 6 sacks as a team in the losing effort.

Both of these teams put forth strong defensive efforts in week 2, with the difference being that the Broncos had the offense to back it up. Buffalo held Carolina to 9 points, but couldn’t mount a single piece of offense and that won’t fly against a Denver team that’s known for their defense. I’ll gladly lay the field goal with the Broncos here to remain undefeated.