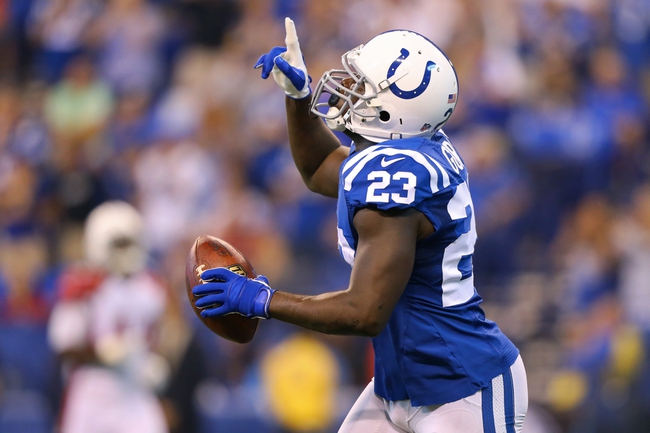 Out at Lucas Oil Stadium on Sunday, the Cleveland Browns and the Indianapolis Colts will be meeting up in NFL action from the AFC.

The Browns are sitting at 0-2 on the year so far following a 21-18 loss to the Steelers in the opener and a 24-10 loss to the Ravens in Week 2. In that Baltimore game, Browns QB DeShone Kizer had a rough day with 182 yards and three picks on 15-of-31 passing, while Isaiah Crowell was able to gain just 37 yards on 10 carries. Rashard Higgins was the lead receiver for the Browns with seven catches for 95 yards.

On the season, Kizer has 404 yards, one TD and four picks for Cleveland, while Crowell has gained 70 yards on 27 carries. Seth DeValve is the Browns’ top receiver so far with 103 yards on six catches and nine targets.

Over on the Colts’ side, they’re sitting at 0-2 as well after a 46-9 defeat by the Rams and a 16-13 OT loss to the Cardinals. In that one, Colts QB Jacoby Brissett posted 216 yards and a pick on 20-of-37 passing, while Frank Gore rushed for 46 yards and a TD on 14 carries. Jack Doyle was the top Indy receiver with eight catches for 79 yards.

So far this year, Brissett has 267 yards and a pick, while Gore leads the Colts rushers with 88 yards and a TD on 24 carries. Doyle is the leading Indianapolis receiver with 11 targets, 10 catches and 120 yards.

Realistically, if you’re not a fan of either team, there’s virtually no interest here. These are two of the worst teams in the league, and with Andrew Luck still sidelined we can expect plenty of miscues on offense from the Colts. If Cleveland can get up for this game and come out with an effort similar to the opener, they should be able to take care of the lowly Colts here. I’ll take the Browns.