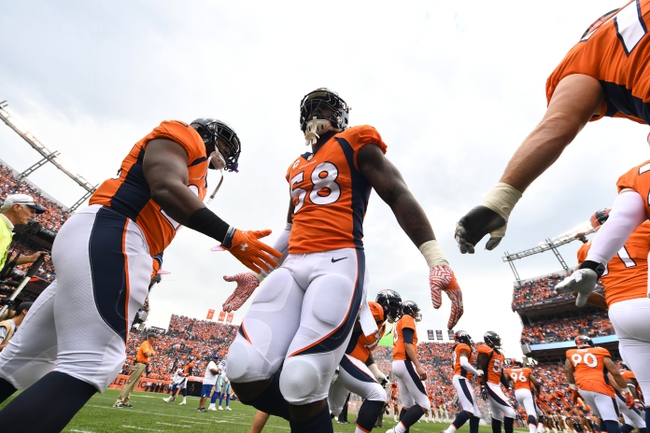 The Denver Broncos look to stay undefeated as they take to the road to face off against the Buffalo Bills who are coming off a loss against the Carolina Panthers.

The Broncos dominated the Dallas Cowboys in Denver last weekend and will look for another strong outing on the road this Sunday against the Buffalo Bills in a game that figures to be defense heavy and little scoring. Denver’s offense though has looked almost as good as their defense so far as Trevor Siemian is looking like a viable option behind centre, CJ Anderson is bouncing back to lead the ground, and both Demaryius Thomas and Emmanuel Sanders are reliable game breakers making this team very dangerous on both sides of the ball. Heading into this weekend against a Bills side that hasn’t looked great through two weeks it could be another opportunity for the Broncos to demonstrate they are a Super Bowl contender, and while Buffalo is never an easy place for visiting teams to get a victory I think the Broncos are getting a tad disrespected here as a modest three point favourite.

The Bills are 1-1 through two weeks and could very well be 0-2 after their week one victory against the lowly New York Jets and haven’t quite looked like a team many expected to be in contention for a wild card spot this season. Buffalo was humbled last week against the Carolina Panthers who dominated in every facet of the game which will force the Bills back to the drawing board as they have been dismal against teams with a winning record and with a light spread here it could be easy money for the Broncos. If Buffalo is going to cover and get the victory they will need to find a way to get Lesean McCoy going against a very stringy Broncos defense, which is obviously easier said than done, as they are among the best units in the NFL and will be out for another show case this weekend.