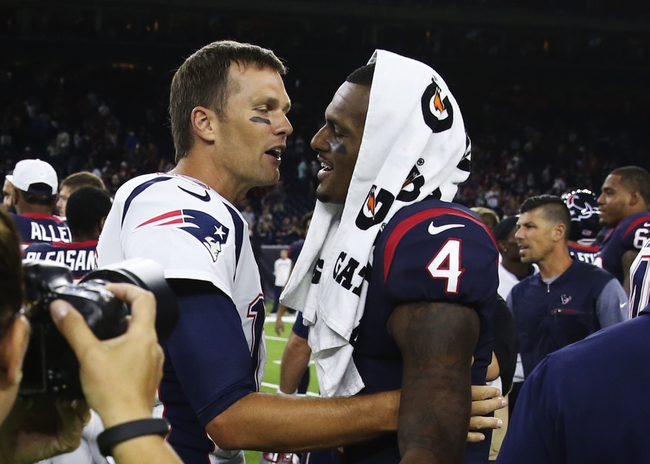 The Houston Texans and New England Patriots meet Sunday in NFL action at the Gillette Stadium.

The Houston Texans look for back-to-back victories to get a game above a .500 record. The Houston Texans have lost five of their last eight road games. Deshaun Watson is completing 57.4 percent of his passes for 227 yards, one touchdown and one interception. Watson enters this game with 47 career pass attempts under his belt. DeAndre Hopkins and Lamar Miller have combined for 185 receiving yards and one touchdown while C.J. Fiedorowicz has four receptions. The Houston Texans ground game is averaging 130.5 yards per contest, and Miller leads the way with 126 yards on 25 carries. Defensively, Houston is allowing 19 points and 287.5 yards per game. Benardrick McKinney leads the Houston Texans with 17 tackles, Kareem Jackson has one sack and Johnathan Joseph has two pass deflections.

The Patriots have played the Texans twice since last September and have outscored them 61-16 during those two games. Yes, the Pats are banged up offensively, the defense has been awful and the Texans have a good defense with a young quarterback who is gaining confidence, but none of that makes me eager to take the points. Brady and company showed last week theyr'e still capable of making the most of what they have and Watson isn't ready to be the difference maker just yet at this point in his career to be able to match the offensive numbers they can produce at home. I look for New England to pull away in the second half kind of how the last two meetings went between these two clubs.