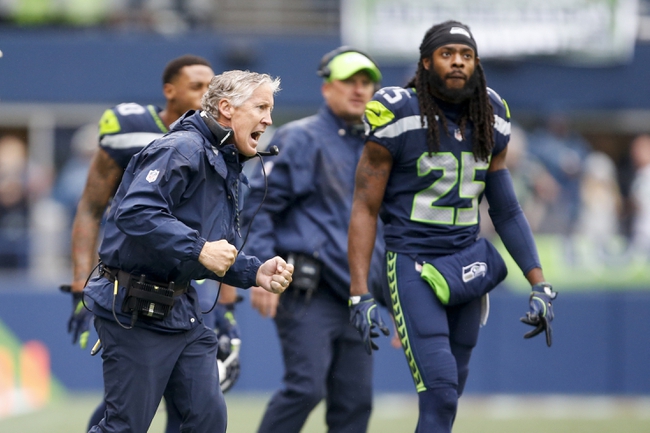 The Seattle Seahawks and the Tennessee Titans square off in week 3 NFL action from Nissan Stadium in Nashville on Sunday afternoon.

The Seattle Seahawks will look to build some momentum after winning their first game of the season, a 12-9 victory over the 49ers in week 2. Russell Wilson threw for 198 yards and a touchdown on 23 of 39 passing, while Chris Carson led Seattle’s ground attack with 93 yards on his 20 carries. Tyler Lockett and Doug Baldwin shared the team lead with 6 catches apiece, with Lockett leading the team with 64 receiving yards and Baldwin following behind in 2nd with 44 yards through the air. Paul Richardson caught 2 passes for 19 yards, including the team’s lone TD in the win. The Seahawks combined for a pair of sacks and an interception, all while holding San Fran to just 248 yards of total offense while dominating the time of possession, with the Seahawks holding the rock for just under 37 minutes of the game in the win.

The Tennessee Titans will also look to build on their first win of the year, a 37-16 victory over Jacksonville in week 2. Marcus Mariota threw for 215 yards and a touchdown that was cancelled out by an interception on 15 of 27 passing. Derrick Henry took his team-high 14 carries and turned them into 92 yards and a touchdown, while Jalston Fowler and Delanie Walker each added a ground TD of their own respectively. Walker also led the team with 4 catches for 61 yards, while Jonnu Smith caught the team’s lone receiving TD in the win. Deuces were wild for the Titans defense in the win, recording a pair of sacks, interceptions and forced fumbles, all while holding the Jags to just 310 yards of total offense in the win.

For some reason, the Seahawks always struggle against the 49ers, so I’m not reading too much into last week. Meanwhile, the Titans beat up on Jacksonville, but in all honesty, who hasn’t over the last couple of seasons. Even though Seattle hasn’t done well on the road, it’s not like the Titans have been killing the number on home soil either. The Seahawks have a strong defense and a dynamic offense that can tear you to shreds if you’re not careful and will give Tennessee problems here. It’s probably lines like these that have resulted in the underdog having so much success in this matchup, but I’m not going to argue getting free points with what I feel is the better team, so I’ll take the free points and Seattle in this one.