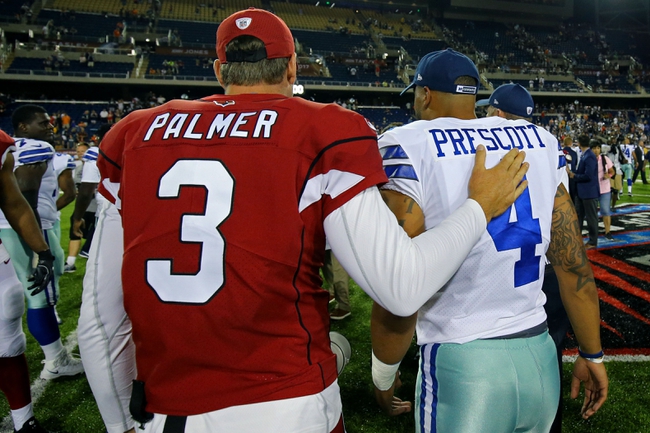 The Dallas Cowboys and Arizona Cardinals meet Monday in NFL action at the U of Phoenix Stadium on ESPN.

The Dallas Cowboys look for their first road win of the season to get a game above a .500 record. The Dallas Cowboys have lost three straight road games. Dak Prescott is completing 60.7 percent of his passes for 506 yards, three touchdowns and two interceptions. Prescott has one or less touchdown passes in six of his last nine games. Jason Witten and Dez Byrant have combined for 258 receiving yards and three touchdowns while Terrance Williams has 10 receptions. The Dallas Cowboys ground game is averaging 84.5 yards per contest, and Ezekiel Elliott leads the way with 112 yards on 33 carries. Defensively, Dallas is allowing 22.5 points and 306.5 yards per game. Sean Lee leads the Dallas Cowboys with 17 tackles, DeMarcus Lawrence has four sacks and Anthony Brown has one interception.

The Arizona Cardinals also look to get a game above a .500 record when they play for the first time at home. The Arizona Cardinals are 3-1-1 SU in their last five home games. Carson Palmer is completing 54.8 percent of his passes for 600 yards, two touchdowns and four interceptions. Palmer has two or more touchdown passes in six of his last nine games. J.J. Nelson and Larry Fitzgerald have combined for 258 receiving yards and two touchdowns while Jaron Brown has four receptions. The Arizona Cardinals ground game is averaging 64 yards per contest, and Chris Johnson leads the way with 44 yards on 11 carries. Defensively, Arizona is allowing 24 points and 316.5 yards per game. Tyvon Branch leads the Arizona Cardinals with 18 tackles, Chandler Jones has three sacks and Justin Bethel has one interception.

I'm not putting too much stock into the Cowboys blowout loss to the Denver Broncos, as I think that says more about Denver than it does Dallas. The team is really good. The Arizona Cardinals played back-to-back road games, which is never easy, but the fact they barely got by the Colts who aren't a good football team and have a new backup QB, doesn't inspire confidence. Palmer is showing signs that he doesn't have very much left in the tank and the Cardinals have shown nothing of a running game in their first two contests. There's also the fact there will be a good percentage of Cowboys fans in the building for this game, as they travel well and a trip to Glendale is more than manageable. I just don't like what I've seen so far from Arizona and aren't really worried about how the Cowboys have looked in their first two games.

I'll eat the field goal with the better team here.