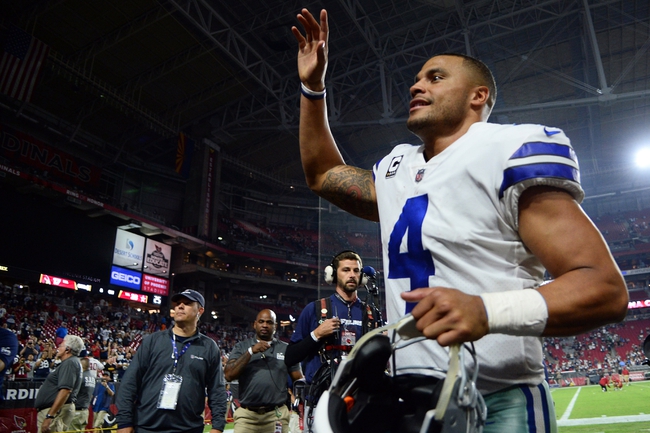 The Los Angeles Rams and the Dallas Cowboys square off in week 4 NFL action from AT&T Stadium in Arlington, TX.

The Los Angeles Rams will look to improve on their 2-1 record following a 41-39 victory over San Francisco in week 3’s edition of Thursday Night Football. Jared Goff completed 22 of 28 pass attempts for 292 yards and 3 touchdowns. Todd Gurley II led the Rams ground attack with 28 carries for 113 yards and a pair of rushing touchdowns, while L.A. had a pair of 100-yard receivers in Robert Woods and Sammy Watkins. Both hauled in 6 receptions, with Woods logging 108 yards while Watkins racked up 106 yards and 2 TDs. Gurley also added 5 catches out of the backfield for 36 yards and a touchdown of his own. Defensively, the Rams combined for 3 sacks, an interception and a forced fumble which they recovered. However that was all the Rams could write home about defensively as they allowed 421 yards and 39 points to an otherwise anemic 49ers offense.

The Dallas Cowboys bookended week 3 of NFL action with a 28-17 victory over Arizona to vault the Cowboys to 2-1 this season. Dak Prescott threw for 183 yards and 2 touchdowns on 12 of 18 passing while also calling his own number 3 times for 16 yards and a rushing TD. Ezekiel Elliott also contributed 80 yards and a rushing TD on 22 carries. Brice Butler led Dallas with 90 yards and a touchdown on a pair of receptions while Terrance Williams and the aforementioned Elliott each logged a team-leading 3 catches. Dez Bryant also chipped in 2 catches for 12 yards and a touchdown in the win. Defensively, the Cowboys combined for 6 sacks, including 3 from Demarcus Lawrence and a pair of sacks from Maliek Collins as the Cowboys gave up 374 yards of total offense and 22 1st downs in the victory.

I think this game comes down to which Los Angeles team we see. The Cowboys have the offense to go score for score with L.A. and the defense to get key stops, so if we see the same L.A. team from week 3, the Rams will be in trouble. If we see the Rams from week 1, then Los Angeles could surprise a lot of people and get the W. However, I feel more comfortable thinking that Dallas will do enough to win by at least a touchdown here, so I’ll lay the points with Dallas until L.A. can show me they can stop a team other than an Andrew Luck-less Colts team.