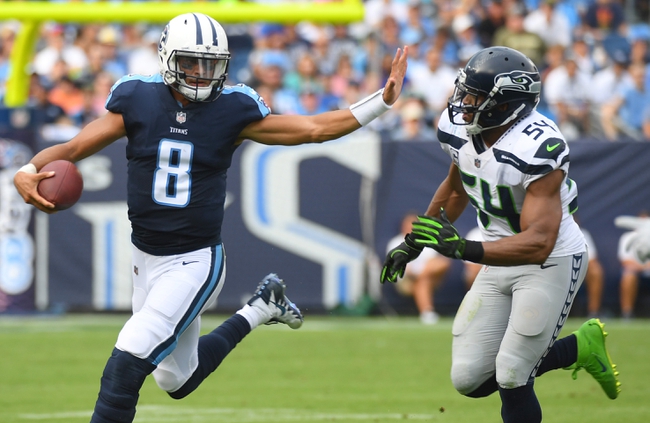 The Tennessee Titans and the Houston Texans face off in an AFC South divisional showdown in week 4 NFL action from NRG Stadium.

The Tennessee Titans will look to build on back-to-back wins, including a 33-27 victory over Seattle in week 3. Marcus Mariota threw for 225 yards and 2 touchdowns on 20 of 32 pass attempts. DeMarco Murray led the Titans with 115 yards and a touchdown on 14 carries, while Derrick Henry added 54 yards on 13 carries for Tennessee’s ground attack. Rishard Matthews led the Titans’ receiving corps with 6 catches for 87 yards and a touchdown, while Eric Decker and Delanie Walker each caught 4 passes and Jonnu Smith added a touchdown grab for the second straight week. Defensively, an Erik Walden sack highlighted an otherwise disappointing effort from Tennessee’s D, giving up 433 yards of total offense and 27 points to a Seattle team that had scored 21 points and racked up 537 yards of total offense through the first two weeks of the season.

The Houston Texans will try to bounce back after dropping a heartbreaking 36-33 loss to New England in week 3, falling to 1-2 this season. Deshaun Watson threw for 301 yards and 2 touchdowns that were cancelled out by 2 interceptions in the loss. Lamar Miller put up 56 yards on 14 carries while Watson racked up 41 yards on 8 carries. DeAndre Hopkins led the etam with 7 catches for 76 yards, while D’Onta Freeman put up 65 yards with a pair of receptions. Ryan Griffin and Bruce Ellington each chipped in a receiving touchdown in the losing effort. The Texans combined for 5 sacks, 4 forced fumbles and a fumble recovery from Jadeveon Clowney who returned it 22 yards to the house for the defensive score.

I won’t lie, I thought the Titans were just a flash in the pan until they made me eat my words last week, beating Seattle. Houston kept it close against New England and gave the Patriots a scare, but a loss like that does things to your confidence more often than not, and keeping it close in a game that has a 14-point spread is nice, but this line is low enough that Tennessee shouldn’t have a problem getting the job done. Give me the Titans.