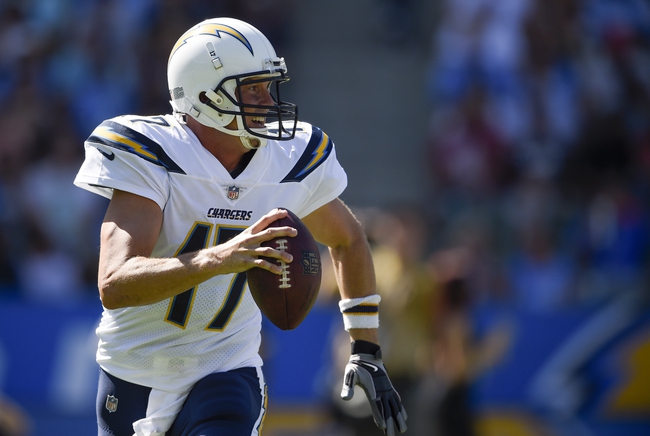 Over in Carson at StubHub Center on Sunday, the Philadelphia Eagles will be facing off against the Los Angeles Chargers in NFL action.

The Eagles are pretty solid so far on a 2-1 record, getting wins over the Redskins and the Giants sandwiched around a 27-20 loss to Kansas City. In that New York game, Eagles QB Carson Wentz posted a 21-of-31 line for 176 yards and a TD. Alshon Jeffery was the top Philly receiver with four catches and 56 yards, while Wendell Smallwood was tops in rushing on 12 carries and 71 yards.

Through three games so far, Wentz has 816 yards, five touchdowns and three interceptions, while LeGarrette Blount is the top Eagles rusher on 26 attempts for 113 yards and one TD. Zach Ertz is Philadelphia’s leading receiver with his 21 catches on 28 targets for 245 yards and one TD.

So far this year, Rivers has 760 yards, four TDs and four interceptions, while Gordon is tops among Chargers rushers with 146 yards and two scores on 44 attempts. Keenan Allen is the lead dog in the LA receiving corps, with 19 catches on 29 targets for 196 yards and one score.

Meanwhile, the Chargers are 5-2 in their last seven games in Week 4 and 5-18 in their last 23 home games. LA is also 0-4 ATS versus a team with a winning record and 0-7-1 ATS in their last eight games overall.

Los Angeles’ record looks pretty bad, but they’ve been able to hang in there for the most part—except for the KC game, and the Chiefs have a good defense. They’re likely going to get a handful of wins this year, but I don’t think that’s going to start this week; the Eagles are emerging as top contenders in the NFC East. The line’s not too bad so I’ll take Philly to cover.