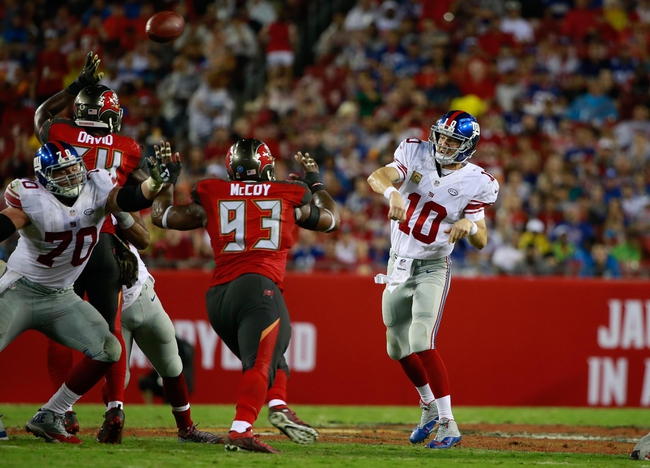 Down at Raymond James Stadium on Sunday, the NFL is bringing us Week 4 action between the New York Giants and the Tampa Bay Buccaneers.

The Giants are sitting at 0-3 on the year so far, following losses to the Cowboys 19-3, the Lions 24-10 and the Eagles 27-24. In that Philly game, Giants QB Eli Manning went 35-of-47 for 366 yards, three scores and two picks. Sterling Shepard had a nice game with seven catches for 133 yards and one TD, while Orleans Darkwa and Paul Perkins combined for just 44 rush yards for New York.

So far this year, Manning has 825 yards, four touchdowns and four interceptions, while Darkwa leads the Giants in rushing on 53 yards from 13 attempts. Shepard is the top Giants receiver with 16 receptions on 22 targets for 200 yards and one score.

Over on the Buccaneers’ side, they’re currently 1-1 following a postponed game versus the Dolphins, a 29-7 win over the Bears and a 34-17 loss to the Vikings. In that Minnesota game, Tampa QB Jameis Winston put up 328 yards, two touchdowns and three picks with DeSean Jackson leading the receivers on 84 yards and a TD on four receptions.

This season, Winston has 532 yards total with three touchdowns and three picks, while Jacquizz Rodgers leads the Buccaneers on 24 rushes for 82 yards and a TD. Mike Evans is the top Tampa Bay receiver with his 21 targets, 14 receptions, 160 yards and a score.

The Giants have a lot of issues right now. They have just 146 yards on 47 rush attempts as a team, as opposed to 460 yards on 102 attempts from their opponents. That’s leaving a lot on Manning’s shoulders and leading to some big mistakes. As for the Bucs, they couldn’t do much right against the Vikings, putting up just nine rushes for 26 yards and allowing three touchdowns to Case Keenum on the other side. It’s weird to have a must-win game this early in the season, but this is must-win for the Giants. New York isn’t a good team, but they’ve simply got too much talent to go 0-4. I’ll take the Giants for the cover and win.