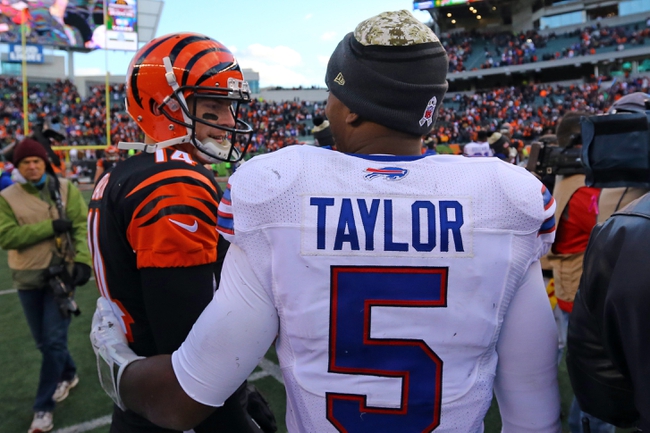 The Buffalo Bills and the Cincinnati Bengals face off in week 5 NFL action from Paul Brown Stadium on Sunday afternoon.

The Buffalo Bills come into this one in a surprising position leading the AFC East with a 3-1 record after a 23-17 victory over the Falcons in week 4. Tyrod Taylor threw for 182 yards and a touchdown on 12 for 20 passing, while LeSean McCoy led the Bills’ ground attack with 20 carries for 76 yards. Charles Clay led the team with 5 catches for 112 yards, while McCoy added 3 receptions out of the backfield and Jordan Matthews hauled in the team’s lone TD grab in the win. Defensively, Micah Hyde logged a pair of interceptions and Jerry Hughes notched a sack, while Lorenzo Alexander forced a fumble that Tre’Davious White picked up and returned 52 yards to the house for a touchdown in the victory.

The Cincinnati Bengals will look to build off of their 31-7 dismantling of Cleveland in week 4 for their first victory of the season to sit at 1-3 coming into this one. Andy Dalton completed 25 of his 30 pass attempts for 286 yards and 4 touchdowns, while Joe Mixon and Dalton tied for the team lead with 29 rushing yards apiece. Tyler Kroft led the Bengals with 6 catches for 68 yards and 2 TDs, while Giovani Bernard caught 3 balls for 67 yards and a touchdown, and A.J. Green caught 5 passes for 63 yards and a receiving score. Defensively, the Bengals combined for a pair of sacks and an interception, all while holding the Browns to just 215 yards of total offense, 5 for 16 on 3rd down and dominating the time of possession battle, with Cincy holding onto the rock for just over 35 minutes in the win.

Buffalo has had a lot of success against the spread in Cincinnati, and with lines like this, it’s not hard to see why. I’m not ready to make Cincinnati a favorite against anybody, even if their victory last week was decent, it came against a Browns team that has struggled for the last couple of years. Buffalo shocked a lot of people including myself last week with their win against Atlanta, and I think they can do it again here. The wrong team is favored in my opinion, so I’ll gladly take the points with Buffalo here.