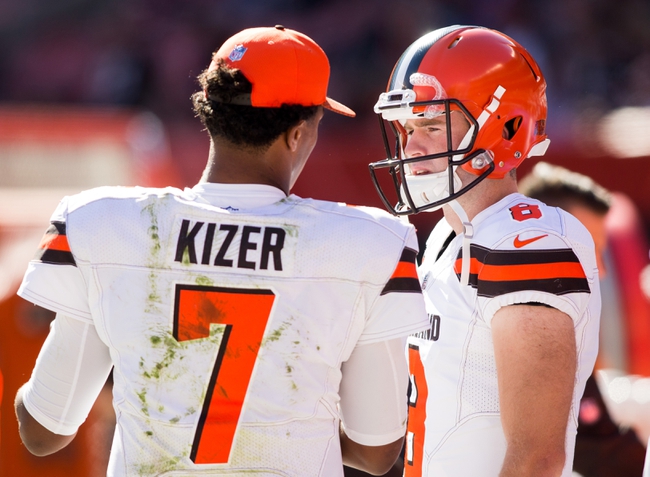 The New York Jets look for a third straight victory to get a game above a .500 record. The New York Jets have lost seven of their last nine road games. Josh McCown is completing 70.1 percent of his passes for 826 yards, three touchdowns and three interceptions. McCown has one or less touchdown passes in six of his last seven games. Robby Anderson and Jermaine Kearse have combined for 386 receiving yards and three touchdowns while Jeremy Kerley has 13 receptions. The New York Jets ground game is averaging 130.8 yards per contest, and Bilal Powell leads the way with 235 yards and two touchdowns. Defensively, New York is allowing 23 points and 338.5 yards per game. Demario Davis leads the New York Jets with 40 tackles, David Bass has two sacks and Terrence Brooks has two interceptions.

The Cleveland Browns would love a victory here to avoid an 0-5 start for the second straight season. The Cleveland Browns have lost 15 of their last 17 home games. DeShone Kizer is completing 51.4 percent of his passes for 764 yards, three touchdowns and eight interceptions. Kizer enters this game with 142 career pass attempts under his belt. Duke Johnson Jr. and Seth DeValve have combined for 341 receiving yards on 29 catches while Ricardo Louis has 10 receptions. The Cleveland Browns ground game is averaging 76.5 yards per contest, and Isaiah Crowell leads the way with 134 yards on 46 carries. Defensively, Cleveland is allowing 22.5 points and 313.5 yards per game. Joe Schobert leads the Cleveland Browns with 34 tackles, Emmanuel Ogbah has two sacks and Derrick Kindred has one interception.

Talk about a game you shouldn't be watching let alone betting. Yikes. But just on a value point of view, the Jets have to be the play here, as the Browns shouldn't be a favorite against anybody. We're talking about a team that's won just four games since November 30 of 2014. Say what you want about the Jets, but they've won their last two games and the defense has come up strong in those contests after getting called out following the blowout loss to the Oakland Raiders. I just don't understand why the Browns are a favorite regardless of what you think about the Jets, as their winning percentage over the last four years makes them an automatic fade. I'll take my free points in a game the Jets should win outright based on the Browns constant losses.