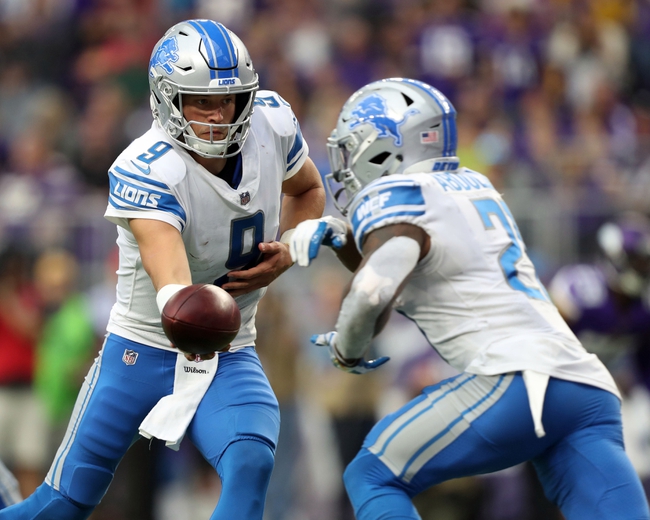 On Sunday up at Ford Field, the Carolina Panthers and the Detroit Lions will be meeting up in NFL action.

The Panthers enter this matchup with a 3-1 record so far, losing to New Orleans in Week 3 but otherwise recording victories over San Francisco, Buffalo and New England. In that Patriots game, Panthers QB Cam Newton went 22-of-29 for 316 yards and three touchdowns, while Jonathan Stewart led the rush on 14 carries and 68 yards.

So far this year for Carolina, Newton has posted 882 yards, five scores and five interceptions, while Stewart is tops in rushing with 230 yards on 59 carries. The leading Panthers receiver is Devin Funchess, with 27 targets, 17 receptions, 216 yards and two scores.

Over on the Lions’ side, they’re sitting at 3-1 on the year. Detroit lost to the Falcons 30-26 in Week 3 but otherwise has beaten the Cardinals, Giants and Vikings. In that Minnesota game, Lions QB Matthew Stafford posted a 19-of-31 line for 209 yards, while Ameer Abdullah headed up the rush on his 20 carries, 94 yards and a TD.

On the season, Stafford has put up 887 yards, seven touchdowns and one pick, and Abdullah is the top Lions rusher with 257 yards and a TD on 66 carries. Golden Tate is the top receiver for the Lions with 32 targets, 24 receptions, 219 yards and one score.

The Panthers are something of an enigma so far, with a win over a bad 49ers team, then an ugly 9-3 victory over Buffalo, a 34-13 stinker against the Saints and a very unexpected 33-30 win over the Pats. Defensively, Carolina has left something to be desired over the past couple of games, and their offense is as unpredictable as ever. As for Detroit, they gave up 53 total points to Arizona and Atlanta—both good offenses—but took care of business against the Giants and Vikings on the road with 17 combined points. I like the Lions to keep it going here and Carolina to show a little hangover from that win over the Patriots. I’ll take Detroit to cover.