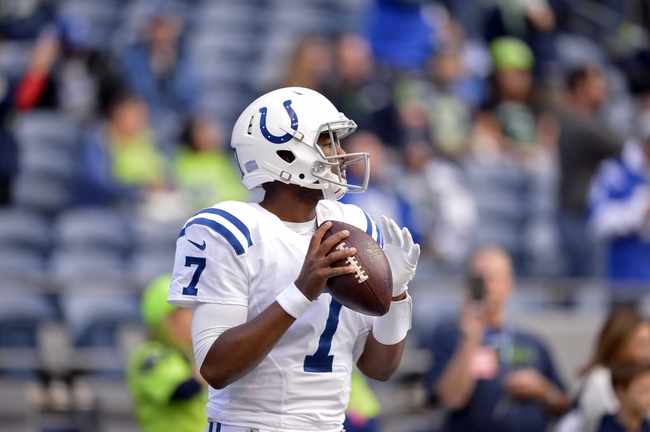 Over at Lucas Oil Stadium on Sunday, we’ve got Week 5 NFL action coming between the San Francisco 49ers and the Indianapolis Colts.

The 49ers are sitting at 0-5 on the year, losing to Carolina, Seattle, Los Angeles and Arizona. In that Cardinals game, 49ers QB Brian Hoyer posted a 24-of-49 line for 234 yards and a pick, while Carlos Hyde was San Francisco’s top rusher on 16 carries and 68 yards.

On the season thus far, Hoyer has 858 yards, two touchdowns and four picks, while Hyde is the lead 49er on the rush with 321 yards and two scores on 65 attempts. Pierre Garcon is San Francisco’s highest receiver with his 285 yards on 33 targets and 20 receptions.

Over on the Indianapolis side, they’re currently 1-3 with a win over Cleveland in Week 3 and losses to the Rams, Cardinals and Seahawks otherwise. In that Seattle game, Indianapolis QB Jacoby Brissett put up 157 yards, one TD and one pick while Frank Gore was the top rusher on 12 carries and 46 yards.

So far this year, Brissett has 683 yards, two TDs and two picks, while Gore is the high man in rushing for the Colts with 191 yards and two TDs on 61 totes. TY Hilton leads Indianapolis in receiving with 289 yards, one TD and 17 receptions on 27 targets.

Let’s face it: this is a game between two bad teams who will be fighting for draft position come season’s end. The Niners haven’t won a game, but aside from that 23-3 loss to Carolina, they’ve hung in there. San Francisco has lost their last three games by three points or fewer. As for the Colts, they looked okay against a bad Cleveland team but were steamrolled by Seattle. There’s not much to get excited about in Indianapolis until Andrew Luck gets back, and that probably won’t be until next month. I like the 49ers to bag a win here, but it’s going to be an ugly game you’ll probably want to stay away from.