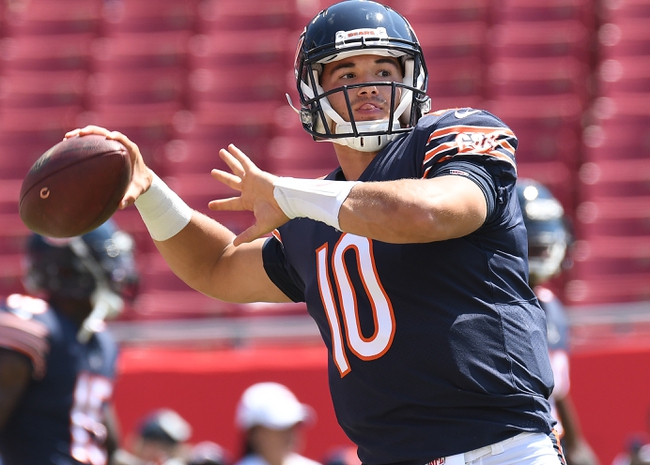 Up at Soldier Field on the Week 5 edition of “Monday Night Football,” the NFL is bringing us an NFC North clash between the Minnesota Vikings and the Chicago Bears.

The Vikings enter this game with a 2-2 record so far. Minnesota recorded wins over New Orleans and Tampa Bay, but lost to Pittsburgh and Detroit. In that Lions game, Vikings QB Case Keenum put up a 16-of-30 line for 219 yards while Dalvin Cook was the top rusher on 13 carries, 66 yards and one TD.

On the season, Keenum has amassed 755 yards and three touchdowns, while Cook (who is now out) is the leading Vikings rusher on his 354 yards and two scores from 74 attempts. Stefon Diggs leads Minnesota in receiving on 32 targets, 22 grabs, 391 yards and four touchdowns.

Over on the Bears’ side, they’re currently 1-3 following losses to the Falcons and Buccaneers, an improbable win over the Steelers and an embarrassing 35-14 loss to the rival Packers in their last outing. In that one, Bears QB Mike Glennon went 21-of-33 for 218 yards, one TD and two picks, while Jordan Howard led the rush on 18 carries, 53 yards and a TD.

So far this year, Glennon is sitting on 833 yards, four touchdowns and five interceptions, while Howard has 252 yards and four scores on 63 attempts. Kendall Wright is Chicago’s top receiver with 18 targets, 14 receptions, 154 yards and one TD.

The Vikings have two notable injury issues coming into this one: QB Sam Bradford is currently day-to-day and could return for this game, while Cook is out for the season with a torn ACL. That means Latavius Murray and Jerick McKinnon will carry the load, and neither inspires much confidence. As for Chicago, they’re benching the well-paid Glennon in favor of rookie Mitch Trubisky, who will make his first career start in a divisional game on the biggest NFL stage. Talk about pressure. All things considered here, the Bears probably have a strong enough ground game to buoy Trubisky and eke out a cover here against a depleted Vikings team, so I’ll take Chicago. That said, there are way too many variables on both sides and I’m staying far away from this game.