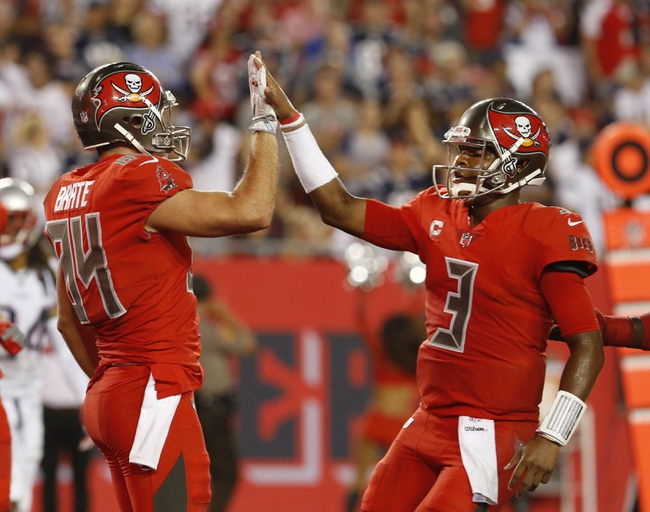 The Tampa Bay Buccaneers and the Arizona Cardinals duke it out in week 6 NFL action from the University of Phoenix Stadium in Glendale, Arizona.

The Tampa Bay Buccaneers come into this one looking to bounce back after a 19-14 loss to New England in the week 5 edition of Thursday Night Football. Jameis Winston completed 26 of 46 pass attempts for 334 yards and a touchdown, while Doug Martin led the Bucs on the ground with 13 carries for 74 yards and a rushing score of his own. DeSean Jackson tied for the team-lead with 5 catches but led the way with 106 receiving yards. Cameron Brate caught 5 balls of his own for 68 yards and a touchdown, while Mike Evans and Charles Sims also caught 5 passes of their own respectively. Defensively, the Bucs combined for 3 sacks, an interception and a forced fumble, all while allowing the Patriots to rack up 402 yards of total offense when all was said and done.

The Arizona Cardinals will look to climb back to .500 after a 34-7 beatdown at the hands of the Philadelphia Eagles in week 5. Carson Palmer threw for 291 yards and a touchdown on 28 of 44 passing, while Chris Johnson led the Cards with 9 carries for a team-high 21 yards on the ground. J.J. Nelson led Arizona’s receiving corps with 80 receiving yards on 4 catches while Andre Ellington caught a team-high 9 passes out of the backfield for 65 yards. Larry Fitzgerald caught 6 balls for 51 yards, while John Brown hauled in the team’s lone touchdown in the losing effort. Defensively, an Antoine Bethea interception and a Chandler Jones sack were the lone highlights as the Cards allowed 419 yards of total offense to Philadelphia, while being dominated in the time of possession battle, allowing the Eagles to hold the rock for over 35 minutes in the Arizona defeat.

Arizona burned me badly last week, as I thought they’d be able to keep up with the Eagles offensively, and at least keep the score respectable. Well, neither of those things happened, and although they fell short, the Bucs held a strong New England offense to just 19 points. Home dogs are something I don’t normally go against, but I have to take Tampa Bay here as more of a fade from Arizona than anything.