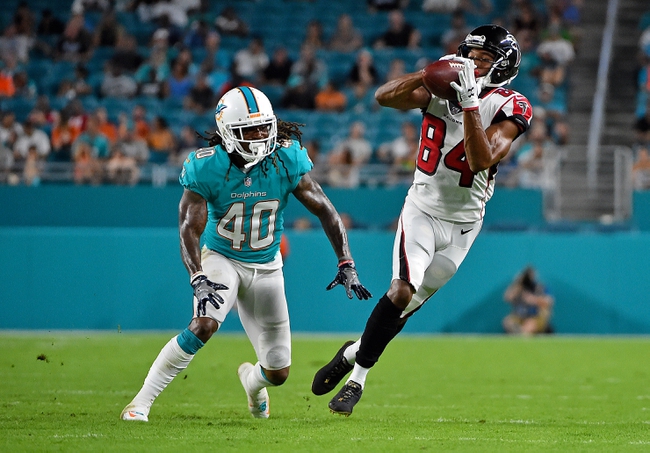 Down at Mercedes-Benz Stadium on Sunday, we’ve got Week 6 NFL action coming between the Miami Dolphins and the Atlanta Falcons.

The Dolphins are somehow 2-2 on the year with wins over the Chargers and Titans sandwiched around losses to the Jets and the Saints. In that Titans game, Dolphins QB Jay Cutler put up a 12-of-26 line for 92 yards, one TD and one pick, while Jay Ajayi rushed 25 times for 77 yards.

So far this year, Cutler has 706 yards, three touchdowns and three interceptions, while Ajayi leads the Dolphins in rushing with 76 attempts for 261 yards. Tops in receiving for Miami is DeVante Parker with 19 catches on 28 targets for 236 yards and one touchdown.

Over on the Falcons’ side, they’re sitting at 3-1 after opening up the year with three wins over the Bears, Packers and Lions, then falling to Detroit 23-17 in their last appearance. (Week 5 was a bye for Atlanta.) In that Lions game, Falcons QB Matt Ryan went for 242 yards, one touchdown and two picks, while Tevin Coleman led the rush (nine carries; 77 yards) and the receiving attack (four rec; 65 yards).

On the season, Ryan has amassed 1109 yards, five touchdowns and five picks, while Devonta Freeman leads the Falcons in rushing on 285 yards and five touchdowns from 70 attempts. Julio Jones is the top Atlanta receiver with his 19 catches on 30 targets for 295 yards.

Let’s be honest: the Dolphins aren’t a good football team despite the .500 record that would indicate they’re at least mediocre. Miami’s two wins have come by a combined eight points, and their two losses had a combined 34-point differential. That said, the defense has been helping to keep Miami in games, and they’re a pretty decent squad. Still, even with Ryan’s turnover problems this year, the Falcons have had two weeks to prepare for this game. I’m going to take Atlanta to cover, even though the line is on the thick side.